The Saints and Our Lady

While it is true that every saint is a unique and unrepeatable masterpiece of divine grace, it is also true that every saint has certain common characteristics, among which is a fervent devotion to Our Lady, a filial love for the Mother of all Christians and Queen of all saints. All the saints demonstrate the happy truth of Pope St. Paul VI’s statement: “If we want to be Christian, we must be Marian.”

When one approaches the lives of the saints, when one begins to read their writings to know them better, one experiences something profoundly striking: one finds oneself before saints who lived in the most varied epochs and in the most diverse conditions: in the solitude of the cloister or on the streets of the city, consecrated to the apostolate of service to the poor, the sick, to immigrants, missionaries to far-off lands; dedicated to youth or stooped down to relieve the sufferings of the elderly and the derelict. There are those who have immolated their own lives in silence and in heroic fidelity to the little things, and those whom God has called to glorify Him with an admirable life of preaching and of miracles; in the learned and wise, in those of noble birth and those of poor birth, virgins and spouses; all a multitude of souls, each one of which constitutes a different and unrepeatable note in the one hymn of “praise to the glory of God” (Eph 1:14).

And yet, in such diversity of experience, of life, of epochs, of conditions, we find in all of them an aspect which they have in common, lighting them up with an unmistakable light: Jesus, who shines in their souls and transforms them into Himself; Jesus, who transfigures even their bodies, rendered by love true images who cry out, “Jesus,” who diffuse “the good odor of Christ” (2 Cor 2:15).

He continues to live in His saints, renewing and perpetuating in them “all the mystery, as in an added humanity,” according to the splendid expression of St. Elizabeth of the Trinity.

Every saint can, therefore, repeat with truth the words of the Apostle: “Itis no longer I who live, but it is Christ who lives in me” (Gal 2:20).

But just as God willed to take on human nature by being born of Our Lady, so, too, it is through her and in her that the saints are configured to Jesus; only Mary can give Jesus to souls and souls to Jesus.

She is the Mother to whom Our Lord entrusts men that she might give them birth to the life of grace, guide them, protect them, save them from every danger, educate them in the spiritual growth of which St. Paul speaks, until they reach “the measure of the full stature of Christ” (Eph 4:13).

And the saints are precisely those who docilely and lovingly let themselves be molded by Mary, to be transformed in the image of her Son, to “present Him to the gaze of the Father” (St. Elizabeth of the Trinity).

We can say, therefore, that all the saints are fruit of the maternal love of Our Lady and that each one of them bears her imprint; it is for this, in fact, that in each one of them, as unmistakable is the light of Christ radiating from their whole being, so, too, it is unmistakable their tender and ardent love towards the Mother of God.

There is no saint who has never been her fervent and passionate devotee, who has never spread the love, the knowledge, the cult of her, writing, preaching, speaking of her, manifesting, in short, in a thousand ways his dedication to the Mother of God.

There are some saints, though, in which such a dedication acquires the quality of totality, of an absoluteness even bewildering: they are those to whom, like the beloved disciple, Jesus has given to His Mother as a particular inheritance. And such a gift received demands, in turn, the complete gift of oneself to Mary; one’s whole life then becomes the “thing, property, instrument in her hands,” “of belonging to the Immaculate even to the point that not only does nothing of themselves remains, but that they become almost annihilated in her, changed into her, transubstantiated into her, that only she remains,” as the “fool” of the Immaculate and martyr of charity, St. Maximilian M. Kolbe, wrote, who doesn’t cease to attract an ever-greater number of souls following his total and unlimited consecration to the Immaculate.

We see these saints, all filled with Mary, burning with her love, incapable of uttering a word, formulating a thought, performing some gesture that isn’t dedicated to her, the loving Mother who has conquered their hearts. And it’s above all in modern times that such a devotion to the Virgin lived in this total and unlimited manner has come about. It seems that the first to spread such a Marian spirituality was St. Louis Grignion de Montfort, who teaches that Our Lady is the easiest, briefest, most perfect and secure way to reach union with Jesus, and for this he was the apostle of a “holy slavery of love” which consists, the Saint explains, “in giving oneself entirely to Mary, and by means of her to Jesus, and then in doing everything with Mary, by means of Mary, in Mary and through Mary.”

Not all the saints lived in this explicit total slavery to Mary, but this doesn’t mean that their devotion to Our Lady was any less great: there are simply diverse impulses in the unity of a single love, because every soul receives from the Holy Spirit a particular gift, and while some are drawn to a life totally Marian, others, for example, receive in heritage the Passion of Jesus, and others still live above all the mystery of the poverty of Jesus, like St. Francis of Assisi, or they immolate themselves for the Church Militant, like St. Catherine of Siena.

Nevertheless, there remains common to all a love, a tender and filial devotion, an unlimited confidence in the help and protection of the heavenly Mother.

By means of his assiduous meditation on the mysteries of the divine Mother, St. Bernard has left us in his writings a sublime echo of the depth which his love for her reached, and so was able to write, “Let not her name depart from your lips, never suffer it to leave your heart … With her for guide, you shall never go astray … so long as she is in your mind, you are safe from deception; while she holds your hand, you cannot fall; under her protection you have nothing to fear; if she walks before you, you shall not grow weary; if she shows you favor, you shall reach the goal.”

Thus St. Dominic passes through the districts devastated by the heresy of the Albigensians, making himself a tireless apostle of Mary and her Rosary, victorious in her name, while the weapons of the powerful didn’t succeed except in spilling blood and violence.

And what about a St. Bernadine of Siena, truly enamored of the Blessed Virgin, whom he invoked and praised with the most tender and fond of names? And of a St. Alphonsus Liguori, who placed such an unlimited confidence in the power of Our Lady’s help so as to say peremptorily, “Whoever is protected by Mary is saved, and whoever isn’t is damned.” And then to who may have manifested a doubt about having fallen in a moment of temptation, St. Alphonsus would invariably ask, “Did you invoke Our Lady?” And if the response was in the affirmative, the Saint held it to be certain that the sin was avoided through the maternal intervention of Mary.

Let us remember St. Gabriel of the Sorrowful Mother who, overcome by a strong interior impulse, was inspired by Our Lady on the occasion of a procession in her honor to leave the world and become a Passionist friar, reaching in only five years, at the school of Mary, the highest levels of sanctity. And let us remember St. Veronica Giuliani, the great Poor Clare Capuchin mystic, a truly favored soul to whom Our Lady showed her particular love in a thousand tender ways, as far as dictating, at times, word for word, the diary which the Saint wrote under obedience. And isn’t it the light of Mary’s smile, contemplated “in the morning of life” which illumines the unmistakable sweetness of the angelic St. Therese of the Child Jesus?

Resemblance to Mary Most Holy

All the saints loved the Virgin, all looked to her, and each one imitated her in some particular aspect, preferring this or that privilege of hers, this or that virtue, the one closer to one’s own vocation or state in life. Thus St. Catherine of Siena loved and imitated especially Our Lady’s virginity, until she reflected in herself an angelic purity, so much so that to those who approached her she appeared to be in some way “immaculate”: a sweet copy of the beloved Mother, another Mary, who everywhere with her mere presence “full of grace,” all love, succeeded in converting even the hardest of hearts.

So, too, did the great saints of the Franciscan Order love and celebrate Our Lady, especially in the mystery of her Immaculate Conception, a mystery which the Order defended over the course of centuries against those who showed themselves adverse or doubtful before the dogmatic definition. While for her part, the great reformer of Carmel, St. Teresa of Avila, looked above all to inculcate in her daughters an understanding of the Carmelite vocation as consecration to the Virgin — “totus marianus est Carmelus” (totally Marian is Carmel) — and she never tired of exhorting them to live a life worthy of her who called them to wear “her habit.”

In turn, St. Charles de Foucauld, the desert hermit, who lived his vocation in poverty and abjection as the “little brother of all,” in the silent apostolate of love of God, in the midst of one of the poorest and most forgotten of peoples, aspiring to “become another living and working Mary,” turned to Our Lady, particularly in the mystery of the Visitation, in which he saw realized the ideal of evangelization through a silent presence of prayer and fraternal charity.

The examples could be multiplied without number, including that most recently given by Padre Pio of Pietrelcina, who flew to Heaven with the crown of the Rosary between his hands … But these few and incomplete ones given here are enough to give a little proof of the most important and irreplaceable role that Mary has always had in the sanctification of souls.

Devotion to Mary, as Vatican II exhorts, must not be reduced to a “sterile and passing sentimentalism and a vane credulity,” but is to be nourished by an ardent and industrious love and turns into a continuous and profound imitation of the virtues of Mary, into a filial abandonment within her arms, that she might configure us to her and our Jesus. Such a devotion must be the soul of our spiritual life, if we want to follow the saints along the path which leads to Heaven.

This article was taken from Volume 1 of the series “I Santi e La Madonna,” published by Casa Mariana Editrice, Frigento. Translated from the Italian by Fr. Jacinto M. Chapin, FI. Used with permission. 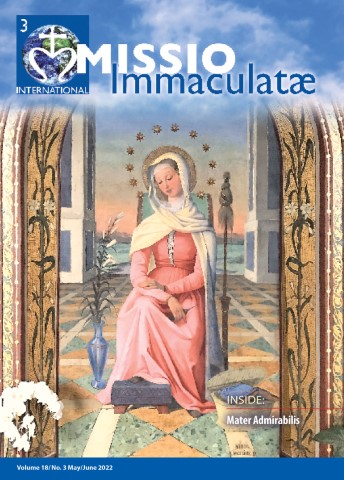