Chosen by God because of his unmatched virtue, St. Joseph was privileged to head the household of Jesus and Mary—the first domestic church. Solid devotion to St. Joseph unfolded only slowly in the course of centuries, until, in 1870, Bl. Pius IX proclaimed him Patron Saint of the Universal Church. Without a doubt, St. Joseph’s singular role as husband of Mary and father of Jesus sets him apart from every other saint, and it is in relation to them that we discover his greatness.

When asked by a questioner about the dignity of St. Joseph in Christian tradition, the late Father Francis L. Filas, S.J., the USA’s leading authority on the subject in his time, responded simply, “Like wife, like husband.” The man closest to Jesus and Mary rightly deserves all honor and praise.

St. Joseph rarely enjoys great press. Usually, he is forgotten or, at least, left standing obscurely in the background. His self-effacement seems to have influenced the scant attention given him by many Church teachers.

In a hymn honoring the Holy Eucharist, St. Thomas Aquinas describes the inadequacy of human language to express full appreciation of the Blessed Sacrament. St. Bernard and other great devotees of Mary voiced the same idea regarding our Blessed Mother. We may say the same about St. Joseph, the husband of Mary and the virgin father of Jesus.

Such appreciation unfolds slowly after much study and reflection. It does not become evident at once in a single glance. Even today many Catholics are inclined to think that St. Joseph is a wonderful saint, but he was not the real father of Jesus, so we honor him as protector of Mary. With that passing comment, such persons promptly overlook St. Joseph and relegate him to the background.

Actually, this opinion was the common outlook in the first thirteen centuries of Christianity. Church history shows that St. Joseph was the victim of benign neglect in the lives of our early saints, and Fathers and Doctors of the Church. St. Augustine and some other thinkers wrote of St. Joseph, but mention of him is sparse. The tide turned slowly in the next five hundred years, and we find simple beginnings of a solid devotion to St. Joseph.

The theology of his vocation, dignity, holiness, and intercession began to flower only in medieval times; and the seventeenth century was the golden age. The enthusiasm of St. Teresa of Avila for St. Joseph was remarkable, vividly expressed in her writings, and perpetuated in the twelve new convents given his name.

The groundswell of attention began with the popes of the late nineteenth century. All the popes of modern times, from Pope Pius IX onward, have issued substantial teaching about St. Joseph in their official documents. Since 1870, the Church officially gave impetus to this new trend, when Blessed Pope Pius IX declared St. Joseph Patron of the Universal Church. The next pope, Leo XIII, set St. Joseph before us with a rank and place best described in his encyclical about Joseph, Quamquam Pluries, 1889: “There can be no doubt that, more than any other person, he approached that supereminent dignity by which the Mother of God was raised far above all created natures.”

Such an exalted understanding and appreciation of St. Joseph’s dignity does not blossom all at once. Sustained study and meditation on his twofold vocation are required. The extremes of too much or too little must be sedulously avoided. A typical reaction often encountered is that the Gospel says Joseph “was a just man.”

What more can be said? Plenty! In 1989, Pope John Paul II offered us a masterful explanation and reflection on the unique vocation of St. Joseph in God’s plan of salvation with his Apostolic Exhortation, Redemptoris Custos (Guardian of the Redeemer). This inspirational pastoral letter, marking the centenary of Leo XIII’s landmark encyclical, treats the person and mission of St. Joseph in the life of Christ and of the Church. It recalls what makes him special, not only for us personally, but for the universal Church.

Some muse that St. Joseph’s role is not treated in any detail in Holy Scripture. Neither is the vocation of Mary. However, what little is said is highly significant. The theological foundations for the privileges granted Mary have become ever more apparent with the passing of time and with assiduous theological reflection. The same process is followed in regard to St. Joseph. Once the divinity of Jesus and the divine virginal Motherhood of Mary were firmly established in Catholic doctrine and in popular understanding, St. Joseph began to emerge without concern that his unique position as virgin father of Jesus and virginal husband of Mary would be misunderstood.

In reality, devotion to St. Joseph is another facet of devotion to Mary. Probing more deeply St. Joseph’s mission leads us to knowing more deeply the greatness of Mary. St. Joseph’s position in relation to Jesus Christ, our Redeemer, stems from his position with regard to Mary, Mother of the Redeemer. The parallel holds true also for Mary and Jesus. The better we know Mary, the better we know her Son, from whom she derives all her dignity and whom she reflects so faithfully. Pope Benedict XV clearly expressed this idea: “By St. Joseph we are led directly to Mary, and by Mary to the fountain of all holiness, Jesus Christ, who sanctified the domestic virtues by his obedience to St. Joseph and Mary.”

Absolutely certain is the fact that God did not choose any unworthy man to be the husband of Mary, who was to be the Virgin Mother of God. Even if St. Joseph had been merely Mary’s protector and not her husband, he would still have occupied a position far surpassing that of any other human being. But Joseph is her husband, related to the Mother of God in a marriage that was not less genuine because it was virginal. God brought the marriage into existence for the express purpose of serving the Incarnation, so that the Son of God might be received and reared within that holy conjugal union. Since, in all creation God could find none more worthy than Mary to be the Mother of Jesus, God could find none worthier than Joseph to be the husband of Mary, and to be related to Jesus by the spiritual ties of a true fatherhood.

In the words of Leo XIII, “If God gave Joseph as a spouse to the Virgin, He assuredly gave him not only as a companion in life, a witness of her virginity, and the guardian of her honor, but also as a sharer in her exalted dignity by reason of the conjugal tie itself.”

On Calvary when Jesus entrusted Mary to St. John’s care for the rest of her earthly life, it was a sign of divine predilection. And we marveled at John’s holiness. Yet, what must have been the divine predilection when Joseph was chosen to be Mary’s husband for the many years of the Hidden Life; to be one of the few persons entrusted with the secret of the Incarnation; to be the only man to receive the primacy of Mary’s affections for humans, and to return that love? Mary would not have been perfect in her spousal vocation if she loved any creature more than her husband. And for Joseph the converse was true.

The similarity of holiness between Mary and Joseph must, of course, be kept in balance. Mary’s relationship to Jesus was far superior to that of Joseph to Jesus. But Pope Leo XIII reminded us that, after Mary, no one lays claim to a greater dignity than Joseph; none possesses greater holiness than Joseph.

Head of the Holy Family

How shall we understand that Joseph is all that he is because of Mary? This means Joseph was given his fatherly responsibility for Jesus because of his virginal marriage to Mary. Through this marriage Joseph was not a mere fosterer, nor was he an adoptive father of Jesus. He was much more than that. Jesus was given to Mary not simply because she was a single maiden, but because she was the virginal and true wife of St. Joseph. Jesus was given to the family of St. Joseph, and that was accomplished only through Mary. Even though St. Joseph was not the physical father of Jesus, he was given the spiritual ties of fatherhood over a Son who was his own, because this Son was the Son of Mary.

Jesus, Mary, and Joseph comprise the Holy Family, the basic unit of God’s strategy for the Incarnation and Redemption. They belong together in the history of salvation. The three are inseparable, and they should always be seen and understood together theologically, pastorally, and in church art. Their special identities in God’s plan are interrelated. To separate one from the others is regrettable and misleading.

Let us not overlook St. Joseph. What he did for Jesus and Mary, he will do for us personally and for the universal Church. In this third millennium of Christianity, Jesus and Mary will bring us closer to Joseph as we realize more clearly and deeply the mission of the Holy Family in salvation history. Veneration of St. Joseph will increase in proportion to the intensity of our devotion to Jesus and Mary. 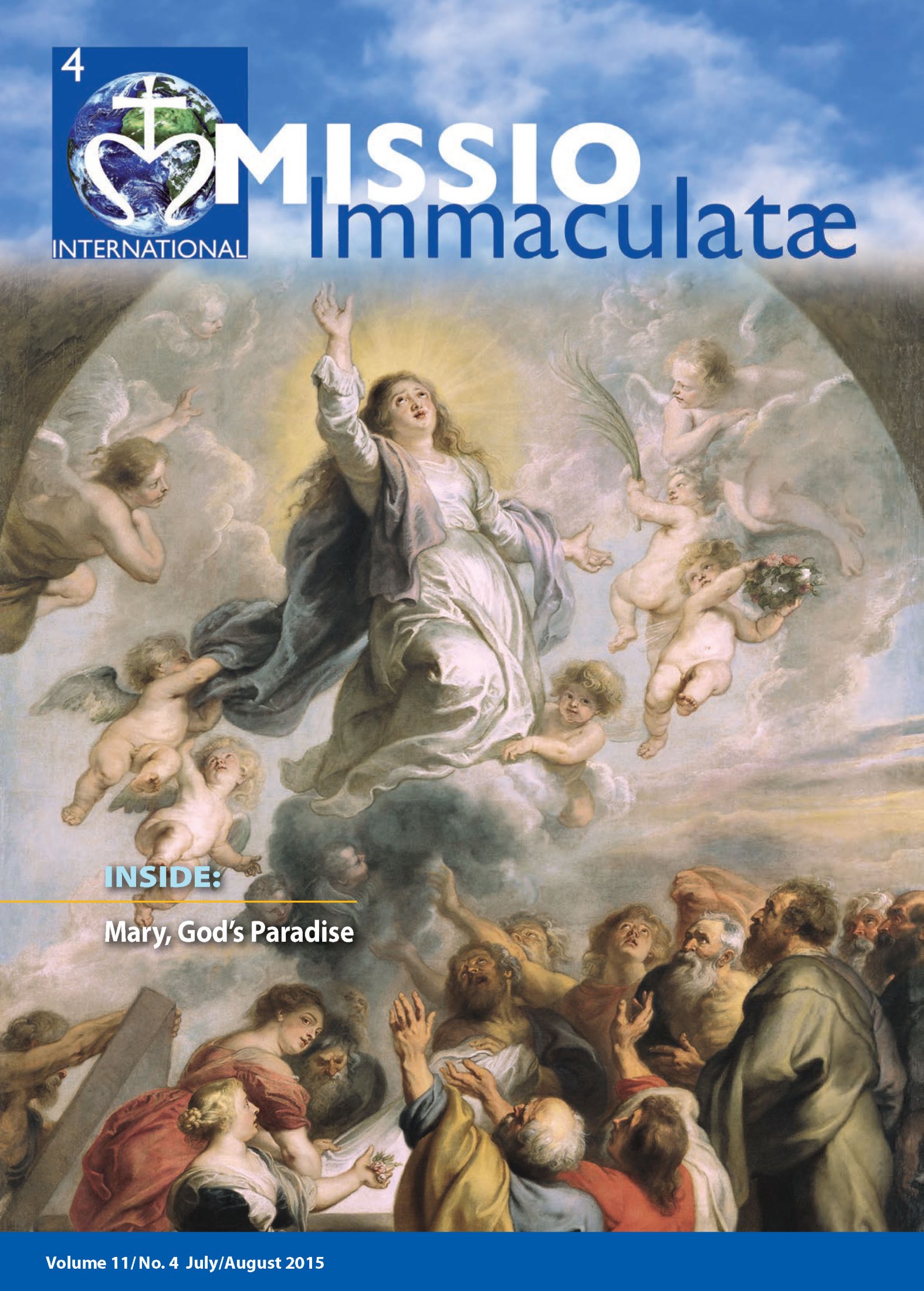