The great mystics of the Church are famed for allowing the Holy Spirit to reproduce the lives of Jesus and Mary in their souls. For Conchita, reproducing faithfully the interior life of Mary, as she was called to do, meant entering into the mystery of Our Lady’s solitude. In the later years of her life, Conchita was called to enter deeply into this mystery, experienced by Our Lady especially after the Ascension of Our Lord and before her own Assumption into heaven.

In Lumen Gentium, the Dogmatic Constitution on the Church and the single most important document of the Second Vatican Council, the council Fathers state that

Embracing God’s salvific will with a full heart and impeded by no sin, she [Mary] devoted herself totally as a handmaid of the Lord to the person and work of her Son, under Him and with Him, by the grace of almighty God, serving the mystery of redemption. Rightly, therefore, the holy Fathers see her as used by God not merely in a passive way, but as freely cooperating in the work of human salvation through faith and obedience (Lumen Gentium = LG #56).

The Blessed Virgin advanced in her pilgrimage of faith, and faithfully persevered in her union with her Son unto the cross, where she stood, in keeping with the divine plan, grieving exceedingly with her only begotten Son, uniting herself with a maternal heart with His sacrifice, and lovingly consenting to the immolation of this Victim which she herself had brought forth (LG #58).

The Blessed Virgin was on this earth the Virgin Mother of the Redeemer and above all others and in a singular way the generous associate and humble handmaid of the Lord. She conceived, brought forth and nourished Christ. She presented Him to the Father in the temple, and was united with Him by compassion as He died on the Cross. In this singular way she cooperated by her obedience, faith, hope and burning charity in the work of the Saviour in giving back supernatural life to souls. Wherefore she is our Mother in the order of grace (LG #61).

This powerful language, which speaks of Mary’s active collaboration in the work of the Redemption, has been referred to for many centuries as coredemption. This is not to say that Mary as Coredemptrix is equal to her Divine Son, but that with Him and under Him and subordinate to Him, no other person ever shared more totally in the work of Redemption.[1]

Now, we have already seen that Blessed[2] Conchita had been called to a truly Marian role in the grace of the “mystical incarnation” that she received on the March 25, 1906.[3] Père Philipon described it in this way:

The central grace in Conchita’s life, the mystical incarnation, revealed to her the most intimate feelings of the Mother of God: totally consecrated to the person and work of Her Son, devoted to the Mystery of the Redemption with Him and under Him, cooperating for the salvation of men in faith and with full obedience.[4]

He then records these extraordinary words from Conchita’s Diary of April 6, 1928:

Mary was chosen among all women in order that in her virginal womb would be brought about the Incarnation of the Divine Word and from that moment, she, wholly pure, the Virgin-Mother, she who accepted everything with love and in the fullest submission to My Father, she did not cease to offer Me to Him as a Victim, Me who came down from heaven to save the world, by sacrificing her Motherly Heart to the divine will of this well-loved Father.

She nourished Me to be a Victim attaining the supreme immolation of her soul when she delivered Me up to be crucified. It was one and the same sacrifice, Mine on the cross and the one which took place in her heart…

Mary ever offered Me up to the Father, She ever carried out the role of the priest. She ever immolated her innocent and pure heart in union with Me to bring graces down on the Church.[5]

This is, in effect, the very mystery of the coredemption: Mary offers Jesus to the Father and at the same time offers herself in union with Him. This is the very same doctrine taught by popes and by the Second Vatican Council.

On the Feast of the Presentation of the Lord in 1907, then known as the Purification of Our Lady, but commemorating the same mystery in the life of the Mother and of the Son, the Lord spoke to Conchita:

I must be offered by you, at every moment, as a victim on behalf of men: and you, united with the great Victim with all His perfections. I want you to offer yourself as did Mary, with her very virtues and qualities. Imitate her and model your own heart on this so beautiful an image.[6]

Thus, we see how the mystical incarnation implied for Conchita replicating the interior life of Mary. This comes to reach its apogee in how Conchita was to live the final years of her life:

After 1917, throughout the last twenty years of her life, through divine inspiration, there is seen developed in Conchita a new form of Marian devotion: imitation of the solitude [soledad] of the Mother of God in the evening of her life, at the moment when the life of love of the Mother of Jesus attained its height and its plenitude, which were of benefit to the ancient Church, to the pilgrim Church and to the Church militant, until the end of time.

Thus, a few days after this, on February 18, Conchita heard the Lord speak these words to her:

In my spiritual life in souls, My Mother was never separated from Me, that is, the imitation of both of our lives must be simultaneous on earth: Mary’s life was modeled on Mine. Thus, just as I was the Redeemer, she was the co-redeemer. The souls who live her most and who are most like to her are the souls who are most like to Me most perfectly. You must imitate her in the practice of virtues, I always told you, especially in her humility and her purity of heart. Observe the virtues she practiced in her solitude, in the last stage of her life, her outlook, and her soul wholly turned toward heaven, and her self-effacement, glorifying Me on earth. Through her ardent desire for heaven, that is, through her passionate love, aspiring for paradise, she merited graces from heaven for the nascent Church.[8]

On June 30, 1917, thirteen days after Our Lady had manifested her Immaculate Heart to the children of Fatima, the Lord spoke thus to Conchita about Our Lady’s final years of solitude, about her heart and about the need to be grateful to her:

This phase of Mary’s life, constituting for her Heart a source of bitterness, the quintessence of martyrdom, the purification of her love at the same time an inexhaustible source of grace and mercy for the world, has remained unknown.

At the foot of the Cross all her children were born. My death gave them life in the Heart of My Mother. But before her death she had to manifest this maternity on earth, gaining, by the sufferings of My absence, an infinitude of graces, present and future, for her children. Her title of Mother of mankind, Mary won by the martyrdom of her solitude after My death. Has the world been aware of this? Does it appreciate it and is it grateful for it? The time has come when the children should show they are real children, showing their veneration for this Heart broken by this subtle and most painful martyrdom, lived through for the sake of their own happiness. There, Mary gained graces for each and every man. It is time for her to be thanked.[9]

Conchita’s experience of the Marian mystery of coredemption would deepen over the years, ever further clarifying Our Lady’s coredemptive suffering and her own participation in it. She recorded these words of the Lord to her of June 22, 1918:

You had for long pondered the first solitude of Mary, that is, the exterior solitude, but you had not thought about the cruelest and the bitterest, the interior solitude which tore her to pieces and in which her spirit felt an agony on account of being abandoned.

The martyrdom of Mary after My Ascension was not caused solely by My material absence. She suffered terrible tests of an abandonment like to that I Myself underwent on the Cross. My Father united her [sufferings] to Mine which gained so many graces.

As Coredemptrix, Mary heard in her soul, so wholly pure, the echo of all My agonies, humiliations, outrages and tortures, felt the weight of the sins of the world which made My Heart bleed, and the moving sorrow of the abandonment of heaven which obtains graces.

It is evident that Mary had nothing to be purified in herself, but only in mankind, that is, in her children, conquering by this sorrow a new crown, that of Mother-Martyr.

Thus it is that she suffered for her children, that she gave them the supernatural life of grace, that she obtained heaven for them.[10]

The Heart of Mary obtained these graces in the martyrdom of a solitude in which she was left, not by men—she had St. John and the Apostles and many souls who fervently loved her—not by Me in My Body—she consoled herself with the Eucharist and with her living faith—but by the Trinity, which hid itself from her, leaving her in a spiritual and divine abandonment.

Mary suffered more than all abandoned souls, since she suffered a reflection of My own abandonment on the Cross, one the worth of which cannot be estimated and which is wholly inexpressible.

It is a great honor for souls when the Father calls them to associate them with the Redemption, with the coredemption, uniting them with Me and Mary; with the apostolate of the Cross, that is, with that of innocent suffering, of sorrow full of love and pure, expiatory and salvific sorrow on behalf of the culpable world.[11]

These are truly extraordinary texts which we may have to read more than once, indeed many times over. They slowly open us up to a mystical world experienced by a chosen victim soul. They may be beyond our experience, but they are not beyond our comprehension. They are entirely in line with the great Catholic mystical tradition, which continues to develop and to bring forth treasures “old and new,” solidly based on Scripture and Tradition.

What did Jesus ask of Conchita? To reproduce in herself the experience of His Mother, who reproduced in herself His own divine-human experience to the extent possible in a mere creature. He asked Conchita to live the experience of His Sacred Heart, experienced in Mary’s Sorrowful and Immaculate Heart insofar as that was possible in her own life. Is that not what He asks of all of us? In the case of Conchita the Church assures us that she lived what the Lord asked of her to a heroic degree.

What is particularly fascinating in the writings of Blessed Conchita is her frequent indication here and in other places that Mary’s coredemptive activity continued even after Jesus’ redemptive activity and extended to the time of her glorious Assumption. We have only opened a small window here. Much more remains to be discovered, clarified, distinguished and understood in terms of the Church’s doctrinal and mystical tradition.

[2]     Conchita is to be officially declared Blessed on May 4 of this year. 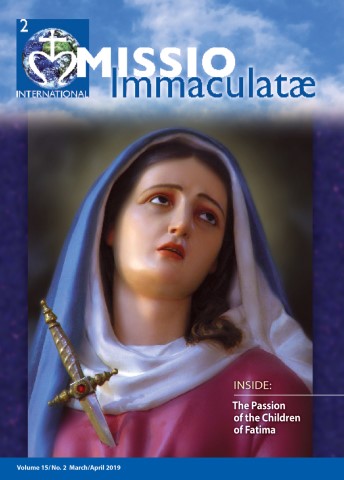