Through his countless writings, Father Emile Neubert continued Our Lady’s task of raising up “another Jesus,” another saint. With each new publication, he championed the apostolic role of the Mother of Christ and was considered by bishops and priests an exceptional guide and teacher of life, possessing the tenderness and strength of a mother.

Emile Neubert was born in 1878, in Ribeauville (Alsace, between France and Germany) at a time of hatred and twisted ideas. He was soon seen as an intelligent and vivacious young man, in love with Christ and with His Mother. He experienced a strong desire to be consecrated to God and to continue the work of Jesus. It had been less than a century since Blessed William Joseph Chaminade had founded, in France, the Marianists, or the “Brothers of Mary,” as they were then commonly known. Chaminade was the leading Mariologist of the 19th century. Emile joined them and began his studies. He earned a degree in letters at the prestigious University of Sorbonne in Paris, followed by one in theology in Fribourg, Switzerland. There he was ordained a priest, and he embarked on a lifelong apostolate of Marian studies and the popularization of Chaminade’s Mariology.

Neubert was passionate about Our Lady, and studied her in the works of the Church Fathers. He wrote his thesis for a degree in theology on Marie dans l’Eglise Anténicéenne (Mary in the Pre-Nicene Church), that is, in the first three centuries of Christianity. It aroused great interest, for it was the first patristic thesis devoted to a study of Mary. It was a milestone in the study of Mariology.

In 1907, Neubert—priest, professor, Mariologist—was already greatly appreciated within his religious family and beyond. He was sent to the United States to carry out his ministry, first as chaplain, then as teacher, and, eventually, as master of novices for the Marianists. He enlightened and warmed the hearts of those whom he met. He led them to his “only love,” Jesus, through affection for Mary, something he was constantly spreading. In 1921 he was recalled to Europe and became rector of the Marianist International Seminary in Fribourg, Switzerland.

Under his guidance, numerous seminarians were formed. He taught them the essential truths, powerful ones which transform and change life. Neubert was the first to allow himself to be transformed into Jesus by Mary’s action; then he taught the method, not only in the seminary to the young men confided to his care, but through preaching, the direction of souls, and the books he wrote, each better than the previous one.

Untiringly, he propounded the importance of Mary’s apostolic mission and our participation with her. In company with St. Maximilian Kolbe and Frank Duff, with whom he corresponded, he championed Mary’s role in the 20th century.

His greatest task, continuing that of Mary, was to raise up “another Jesus.” He said it with more than 150 writings, studies, articles, and books. In 1933, Holy Year of the Redemption, he published his small, but great, masterpiece: Mon Idéal, Jésus Fils de Marie, (My Ideal Jesus, Son of Mary) and, in the same year, Marie dans le Dogme (Mary in Doctrine). Then, in 1936, La Vie de Marie (The Life of Mary); in 1941, Notre Mère (Our Mother); in 1944, La Reine des Militants (Queen of Militants), written for members of Catholic Action; in 1952, Marie et Notre Sacerdoce (Mary and the Priestly Ministry), directed especially toward priests, the fruit of his experience in formation at the seminary.

Bishop Louis Kerkhofs of Liège, to whom Neubert had sent the manuscript of this last work for critical review, wrote: “The present-day clergy desires to be of its time: socially oriented, active, involved. Your book will help priests to develop a true social mentality, the secret of profound action, and an authentic involvement through continuous intimacy with Jesus and with his Mother, who is also our Mother.”

Meanwhile, already in 1935, Neubert was a founding member of the French Society of Marian Studies. From that time on, he was seen by bishops, devout priests, and authentic and profound Christians as an exceptional guide, a teacher of life, simple, balanced, intense, who reached the inmost fibers of the heart and led it to God with the tenderness and strength of a mother.

The “Best-Seller” about Mary

Among all his books, the one preferred by both lay persons and by priests is My Ideal, Jesus, Son of Mary. During the lifetime of the author, it had an extraordinary circulation in France, in Europe, and in the world. It was translated into all the European languages, into Japanese and even into Arabic and into the Zulu language, with over 500,000 copies sold worldwide. Truly a “best seller” of Our Lady, for years it continued a kind of triumphal march in the world. Its success was due to a strong and gentle synthesis of faith and devotion, of prayer and action, of simplicity and depth, centered on Christ and Mary. As Christians, we are each called to be, like John, “the disciple whom Jesus loved” (Jn 13:32). We are to take Mary as Mother into our own lives (Jn 19:27) and allow her to guide us to a more intense intimacy with Jesus and the apostolate.

Neubert teaches us by putting words into the mouth of Jesus and of Mary. He tells us that, as baptized people, we must not be content with the mediocrity of a few daily prayers and a minimal moral rectitude. We must be saints—through a life of union with Jesus and by proclaiming Jesus to others—saints and apostles, centered on God and missionaries along the streets of the world, with prayer, witness, and word.

Mary is the road toward the realization of all this. She is the Mother and the Educator. She educated Jesus, John (His chosen one), and the apostles of her Son; she can educate each of us to become “another Jesus.” She is Mother and Educator of all. So it is that his work, My Ideal, Jesus, Son of Mary, is entirely Christocentric: it starts with Jesus, and from the Cross, it is Jesus Himself who leads us to Mary: “Behold, your mother!” For her part, only Mary can bring us to the goal which can be Jesus alone.

A School of Holiness

In the first two parts of the book, it is Jesus Himself who explains Mary, to the point of telling us: “That I may love her in you.” In the last two parts of the book, Mary herself speaks, explains her mission and calls us to allow ourselves to be educated by her as “another Jesus,” that we might become His apostles in the world. A great joy bursts forth: the joy of being instruments in the hands of her “to whom are reserved the final victories over evil.” She who has overcome all heresies of the past will overcome even those of our time, as has been taught by St. Louis de Montfort, St. Alphonus Liguori, and Blessed William Joseph Chaminade. This is a tremendous task to be lived out with Mary every day of our lives.

We do not know how many readers of these simple and sublime pages achieved the heights of holiness under the heavens. Neubert himself knew some such persons. He was able to write biographies of two of them: Sister Maria Regina, and René Mougel. Among the younger readers of My Ideal, in 1961, was a fourteen year old Spanish youngster, Ven. Faustino Perez-Manglano. In his diary he wrote: “After having read a quarter hour of My Ideal, Jesus, Son of Mary, I became conscious of the marvelous beauty of this book. No words can express the greatness of its content. How marvelous is my mother Mary! This book teaches me how to increase my love for Jesus, for Mary, and for the persons who are dearest to me, my dad and my mom.”

Barely sixteen, Faustino died, with all the signs of holiness. Neubert learned from Father José Maria Salaverri (who subsequently authored a beautiful biography of Faustino, Perhaps God Is Speaking to Me) that his book, My Ideal, Jesus, Son of Mary, had helped this young man become holy. Neubert experienced great joy at the thought. He wrote: “I thank the Lord for having permitted me to contribute, with my book, to increase his filial and apostolic love for the Mother of Jesus…. I am sure that, with the example of his life, he will proclaim his devotion to the heavenly Mother.” Faustino was declared Venerable by Pope Benedict XVI on January 14, 2011.

In 1966, with the approach of the sixtieth anniversary of Neubert’s doctorate in theology, the University of Fribourg granted him an honorary degree. This was presented in person by the dean of the Faculty of Theology for the very important impact of his thesis of 1907 and of his entire life on Marian studies. We should like to know more of the interior life of this educator of saints, but he never deliberately raised the veil. But it is clear that “he hides behind the words of his books, particularly in My Ideal, Jesus, Son of Mary,” as Salaverri (later, Superior General of the Marianists) wrote. He also quoted a confidential statement of Neubert to his spiritual director: “I thought, in the past, that Mary had charge only of bringing us to Jesus, and that, once we had achieved closeness to our Lord, her role would have ended. But now I am aware that the closer I come to Jesus, the more I have to remain in him, and in order to love him as I would want, I have to sense that Mary is near me.”

Before dying like an ancient patriarch at 89 years of age in 1967, he wrote yet another book in his captivating style: Sainte Thérèse de l’Enfant-Jésus et la Sainte Vierge (St. Theresa of the Child Jesus and the Holy Virgin). He, too, venerable teacher, was fascinated (and who is not?) by the small but great Saint of Lisieux.

What must we now do? Take in hand this masterpiece of Father Neubert, My Ideal, Jesus, Son of Mary, reflect on it, live it, pray every day. Let us pray as he suggests: “O Jesus, grant me the grace of loving your Mother and of having her loved as you love her and wish her to be loved. And you, O Mary, obtain for me the grace of loving Jesus and of having him loved by everyone as you yourself love him.”

Many of the books and booklets written by Father Emile Neubert, S.M., have been translated into English. Recently published and available from the Academy of the Immaculate are: My Ideal, Jesus, Son of Mary; Life of Union with Mary; Devotion to Mary; Mary and the Priestly Ministry; and Mary’s Apostolic Mission and Ours. Father Neubert’s other works translated into English are available for consultation at The Marian Library at the University of Dayton (consult The Mary Page, www.themarypage.net) and at the North American Center for Marianist Studies (www.nacms.org). 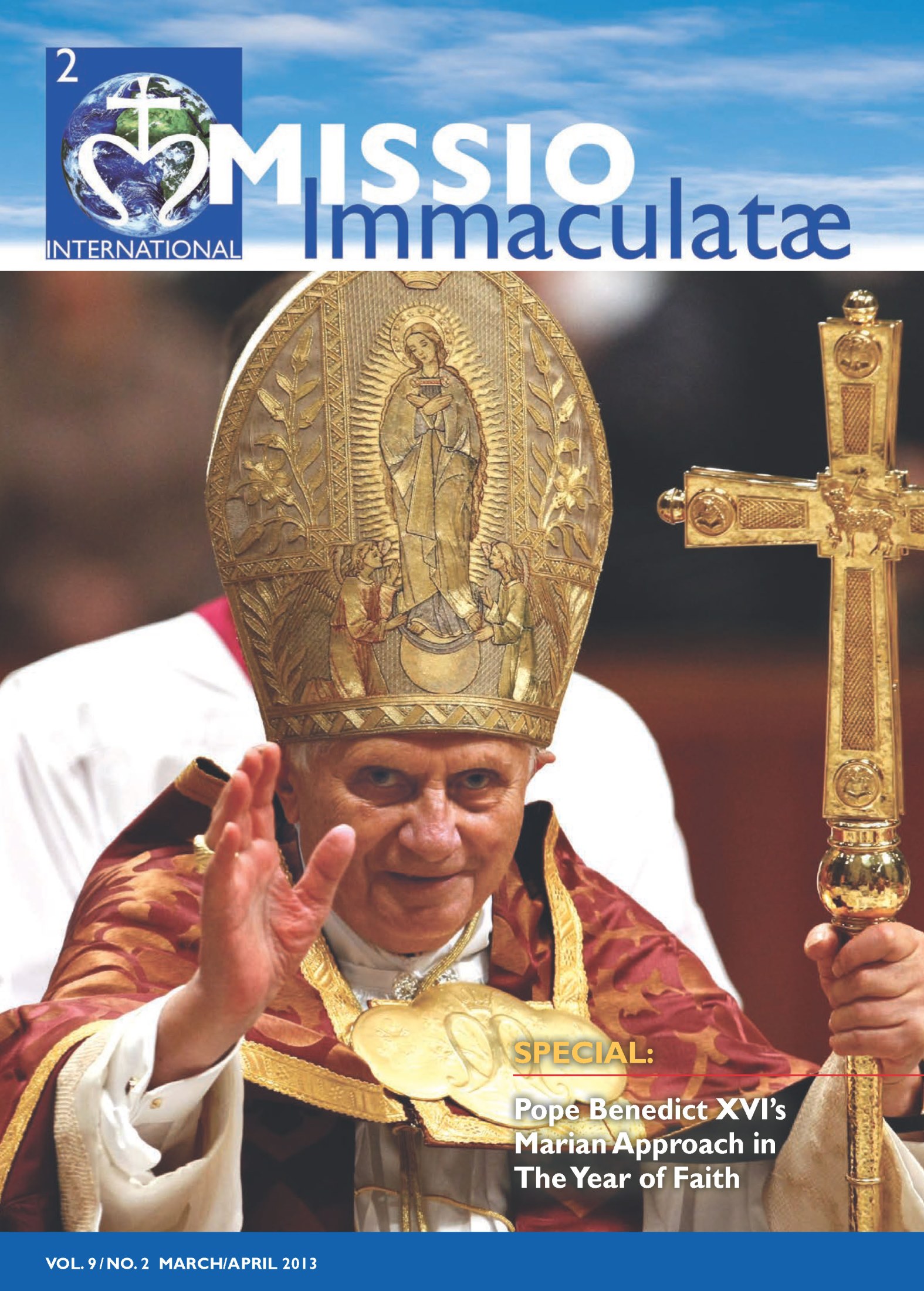