An Interview with Fr. Barnabas Hechic, O.F.M., President of the Scotus Commission

Q. What is the Scotus Commission, and what is its function?

A. The Scotus Commission takes its name from Blessed John Duns Scotus: the Latin “Scotus” means Scotch, and the word “Commission” indicates its makeup of various members, including one Franciscan Friar of the Immaculate, Fr. Jerome [Pica], sharing the same mission or work.

The commission was formed in 1938, in Rome. Before that, there was a vice-commission, or better, a sub-commission located at Quaracchi, along with other commissions. It was transferred to Rome during the time of Fr. [Charles] Balic [a Franciscan friar originally from Croatia], whose doctrinal thesis and subsequent studies demonstrated him to be the foremost scholar of his day versed in the doctrine of Duns Scotus and in the relative importance of the respective manuscripts.

The initial work of the Commission centered on advancing the cause for the formal beatification of Duns Scotus. The cause had been long in gestation, although, in fact, in certain areas, most notably at the Cathedral of Nola, this cultus as blessed was already rendered him. Now, it would not have been possible to realize his formal beatification or recognize the cultus or veneration already tacitly permitted him as authentic without undertaking a precise and accurate study of his authentic writings. Thus, it was necessary to verify which of the writings attributed to him were authentic and which were spurious. Once the spurious writings were discarded, it was then necessary to publish his authentic writings in a critical edition so as to be able to distinguish the original text of Duns Scotus from interpolations and alterations made by his disciples.

This was the original aim of the Commission. Later, the Commission sensed that this critical edition needed to serve as a font for higher-level knowledge and study of his authentic thought. The same had been done earlier for St. Thomas, St. Bonaventure, and many other saints.

Q. How many volumes have you published up to now? And what are you presently working on?

A. At first, we thought about publishing his works in a chronological timeline according to the order in which they were originally written. However, because we did not have precise historical documents enabling us to establish such a chronology, we decided to begin with the Ordinatio [a commentary on the four Books of the Sentences by Peter Lombard], the last and most important work of Duns Scotus. A similar approach was used in the publication of the critical edition of St. Thomas’ works: the first work published was the Summa Theologica, his most important work and one of his later writings. The Commission’s work of publication commenced in 1950, though, in reality, the spade work had started in 1938 with the identification of manuscripts—preserved by photograph or on microfilm—in various European libraries. This preliminary research was absolutely necessary in order to complete the collection of manuscripts already present to the Commission at Quaracchi. With the list of manuscripts and the various copies of photographs and microfilm in hand, our study to establish the most important manuscripts and those of less importance could commence. Thereby we were able to verify the “foundational manuscript”—Codex 137 from the library of the Sacro Convento in Assisi, burial place of St. Francis. This was the most important of all, without which it would have been nearly impossible to put together a critical edition of Duns Scotus’ works.

The first two volumes were published in 1950 and presented on the occasion of an international Scotistic Congress in Rome. We have published more volumes since then, to the point where we have now completed publication of the first three books of the Ordinatio. We are now in the process of completing the fourth book, the first two volumes of which have already been published, with the next volume (on the Sacraments) to appear soon.

In addition to this work we have already published a chronologically earlier work—the first lectures of Duns Scotus on the Sentences of Peter Lombard. This work is known as the Lectura, and sometimes also as the Opus Oxoniensis (Oxford Work). Along with the Lectura composed by the Master himself, there exist Reportationes. These latter consist of notes taken by disciples while Duns Scotus was lecturing. Of greater importance, however, are the authentic works of Duns Scotus himself. We have published all parts of the Lectura attributed to him (the fourth and final book is not his work). There are still more volumes of the fourth book of the Ordinatio to be published, including one on the four last things. A final volume to be published will contain an analytical index of works cited in the published volumes and a doctrinal index for all four books of the Sentences. This completes the project of the Commission.

Much more recently, the Franciscan Institute of St. Bonaventure in America (New York) and then the philosophical faculty of the Catholic University of America in Washington, D.C., undertook to publish Duns Scotus’ philosophical works. So far, five volumes have appeared. A critical edition of the theological Reportationes is now in progress. When completed, this will enable us to have a clearer idea of what Scotus taught. The edition will be printed in columnar format enabling the reader to compare Scotus’ thought with what his disciples managed to grasp and record in their annotations.

Q. Why has Duns Scotus not received the same consideration as Thomas of Aquinas? Why has it taken so long to appreciate his doctrinal contribution?

A. First of all, the teachings of St. Thomas were imposed as the standard, first for the Domincans by their Order, and then for all the Church. He has thus become a sort of “principal teacher” of theological doctrine. But St. Bonaventure and Duns Scotus have always been studied as well, though without imposition on the part of Church authorities.

There is a great difference between Duns Scotus and St. Thomas regarding the truth of the Immaculate Conception. St. Thomas, as well as St. Bonaventure and other medieval authorities, failed to resolve theologically how Christ, the universal Redeemer, redeemed Our Lady if she was free from original sin as well as actual sin: from what, then, was she redeemed? Duns Scotus succeeded where others had failed in explaining how Mary could at once be redeemed and free from all taint of original sin. He posed the issue in this way from the divine standpoint: “I can save you in two possible ways: either purifying you after having contracted the stain, or preventing you from contracting the stain.” Therefore, God, in view of the merits of Christ (and never apart from His merits), preserved Mary from original sin. It was not at all fitting that God would permit the Mother of his Son to be the slave of the evil one for even a moment. This doctrine, known as the preservative redemption of Mary, was taught very clearly by Duns Scotus. It gradually gained universal acceptance and finally was solemnly declared a dogma by Bl. Pius IX in 1854, a declaration confirmed four years later when Our Lady appeared to St. Bernadette, identifying herself as the Immaculate Conception.

Since St. Thomas was considered the great Doctor of the Church, he came with the passing of time to be regarded by some as the one Doctor to study to the exclusion of all others. Duns Scotus’ variance with St. Thomas on the doctrine of the Immaculate Conception historically furnished an excuse to adopt and to promote this unwarranted position. The thought of the Dominican Thomas of Sutton, a contemporary of Duns Scotus, summarizes the gratuitous premises underlying this negative view of Scotus: Sanctus Thomas omnes difficultates theologiae delucidavit (St. Thomas has sufficiently explained all theological difficulties). Therefore, continues Thomas of Sutton, there was no need to write any more books on theology. Hence, the works of Duns Scotus [and others] are quite unnecessary and possibly harmful. The solemn definition of the Immaculate Conception is a neat refutation of this point of view.

Q. Could Duns Scotus be proclaimed a Doctor of the Church?

A. It was impossible before his recent beatification because of a preconceived bias in his regard. Now, however, it is possible. But first he must be declared a saint; his cause for canonization is underway. I do not know when this will happen, but when it does, then it will be quite possible—or better, feasible and probable—to declare him a Doctor of the Church. 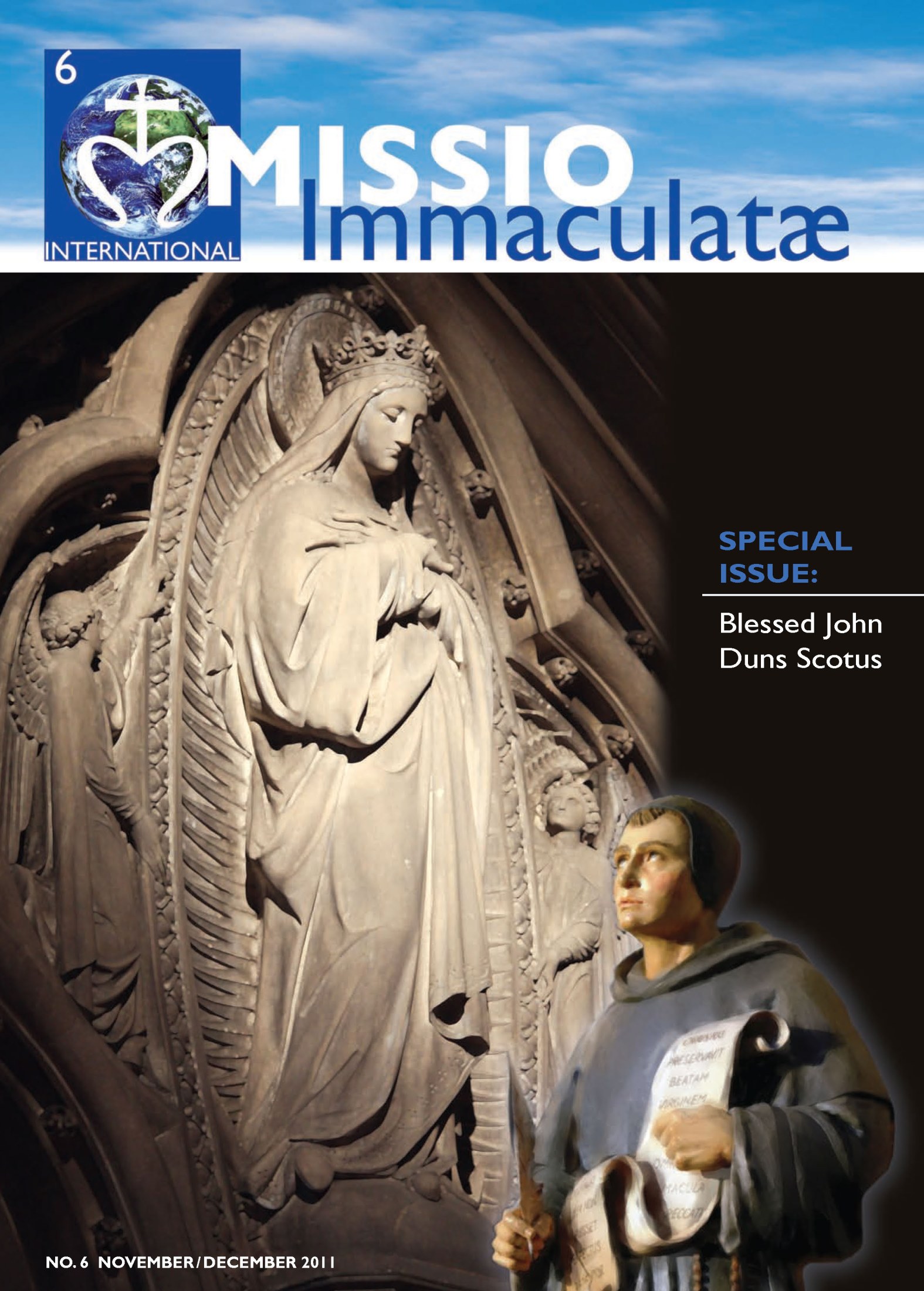