Luke 1:29 and Dialogisomai: The Immaculate Conception and the Seven Capital Sins

The Greek verb dialogisomai (“to reason,” “to think,” or “to deliberate”) occurs in eight different contexts throughout the New Testament. This word is of special interest to Mariology because it is found in the Annunciation text, where St. Luke employs dialogisomai to portray that most pivotal of all moments in salvation history, when the Immaculate Virgin Mary pauses to reflect upon the Archangel Gabriel’s greeting:

“[She] kept pondering what manner of greeting this might be” (Lk 1:29, Douay-Rheims).

Upon surveying the seven remaining usages of dialogisomai in the New Testament, it becomes evident that everyone else who attempts to reason in this way, whether it be the apostles, the chief priests and elders, or the scribes—indeed, all men—universally do not arrive at the truth of things via dialogisomai, but rather fall into error and, consequently, into sin. In other words, a certain ubiquitous frustration, or even futility, to the human faculty of reason accompanies the verb dialogisomai.

Now, the sole exception to this etymological trend is seen in the Immaculate Virgin Mary at the Annunciation. Her reason does not fail her at the critical moment of discernment and decision because of her humility, even though she is greatly “troubled” by Gabriel’s greeting. Still, she does not waver in giving her assent, because she is the Immaculate and as such is “wholly borne by God’s grace” (Catechism of the Catholic Church (CCC), 490). However, juxtaposed to the Immaculate Virgin Mary at the Annunciation—and this is what is most astonishing—the seven remaining passages in which we find dialogisomai stand in direct correspondence to the seven capital sins.

The following seven passages in which dialogisomai occurs have been classified below according to their specific correspondence to a capital sin. The English translation of dialogisomai has been italicized.

1. “Pride is undue self-esteem or self-love, which seeks attention and honor” (CCC, glossary). As the apostles adequately demonstrate in the following passage, pride often manifests itself as “a desire to surpass one’s equals” (Attwater, A Catholic Dictionary):

And they came to Capharnaum. When He was at home, He asked them, “What were you arguing about on the way?” But they kept silence, for on the way they had discussed with one another which of them was the greatest (Mk 9:32-33).

2. Avarice is “a disordered inclination or desire for pleasure or possessions” (CCC, glossary). The covetous man in the following parable is driven by the fear of losing his possessions:

And He said to them, “Take heed and guard yourselves from all covetousness, for a man’s life does not consist in the abundance of his possessions.” But He spoke a parable to them, saying, “The land of a certain rich man brought forth abundant crops. And he began to take thought within himself, saying, ‘What shall I do, for I have no room to store my crops?’ And he said, ‘I will do this: I will pull down my barns and build larger ones, and there I will store up all my grain and my goods. And I will say to my soul: soul, you have many good things laid up for many years; take your ease, eat, drink, be merry’” (Lk 12:15-19).

3. Envy is “resentment or sadness at another’s good fortune, and the desire to have it for oneself” (CCC, glossary). It was out of envy that Cain killed his brother, Abel. Here in the parable of the wicked tenants, the vinedressers follow in their father’s murderous footsteps.

“But the vinedressers, on seeing Him, argued with one another saying, ‘This is the heir; let us kill him, that the inheritance may become ours’” (Lk 20:14).

4. Wrath is an inordinate desire for revenge over injustices (real or imaginary) done to us. Here, after Jesus’ powerful demonstration of righteous (or “zealous”) anger in the cleansing of the temple, the chief priests and elders react with indignation, which is one of the six “daughters” of anger listed by St. Thomas Aquinas (Summa Theologica (ST) II-II Q. 158, a. 7).

And when He had come into the temple, the chief priests and elders of the people came to Him as He was teaching, and said, “By what authority do you do these things? And who gave you this authority?” Jesus answered and said to them, “I also will ask you one question, and if you answer me this, I in turn will tell you by what authority I do these things. Whence was the baptism of John? From heaven or from men?” But they began to argue among themselves (Mt 21:23-25; cf. Lk 20:1-5).

5. Lust is an inordinate desire for sexual pleasure. It is also “the chief cause of lack of rectitude in the reason” (ST II-II Q. 55, a. 8, obj. 1). That is to say, lust, more than any other vice, brings about error. The following passage provides a link with this capital sin in the figure of the adulterous King Herod, whose lust ultimately caused the death of St. John the Baptist. Herod’s lust was also—one may infer—the “chief cause” of his erroneous belief that Jesus was the Baptist come back to life. Here, the people are mistaken in a similar vein by confusing St. John the Baptist for the Christ.

Now as the people were in expectation, and all were wondering in their hearts about John, whether perhaps he might be the Christ… But Herod the tetrarch, being reproved by him concerning Herodias, his brother’s wife, and concerning all the evil things that Herod had done, crowned all this by shutting up John in prison (Lk 3:15, 19-20).

6. Gluttony is defined as “overindulgence in food or drink” (CCC, glossary). It may be manifested by being overly preoccupied with food or even by an obsessive anticipation of one’s next meal, as the Apostles demonstrate here:

7. Sloth (or Acedia) is “a culpable lack of physical or spiritual effort” (CCC, glossary). Archbishop Fulton Sheen notes that it is manifested in laziness, procrastination, idleness, indifference and nonchalance. In the following passage, the four friends of the paralytic are anything but slothful, having climbed up to the roof of the house where Jesus is, in order to lower their friend at the feet of the Divine Physician. However, the scribes, who are comfortably seated nearby, may be charged with sloth on two counts: 1) a “lack of physical effort” in that they witness the whole scene sitting down, as it unfolds, not offering even a modicum of help; and 2) a “lack of spiritual effort” in that they show no compassion or care whatsoever for the sick man.

And Jesus, seeing their faith, said to the paralytic, “Son, your sins are forgiven you.” Now some of the scribes were sitting there and reasoning in their hearts, “Why does this man speak thus? He blasphemes. Who can forgive sins, but only God?” (Mk 2:5-7; cf. Lk 5:20-22).

1. The futility of human reasoning in the absence of grace, due to original sin and its specific effect of the darkening of the intellect (traditionally called ignorance).

2. The absolutely singular and superior reasoning capacity of the Immaculate, who alone successfully arrives at the truth of things—vis-à-vis the illumination of supernatural faith—and is identified by the Archangel Gabriel as “full of grace.”

Therefore, a detailed study of dialogisomai in the New Testament provides a strong scriptural indication of the absolutely singular privilege of the Immaculate Conception: that is, Our Lady’s faculty of reason stands alone as having never been darkened by original sin and ignorance. 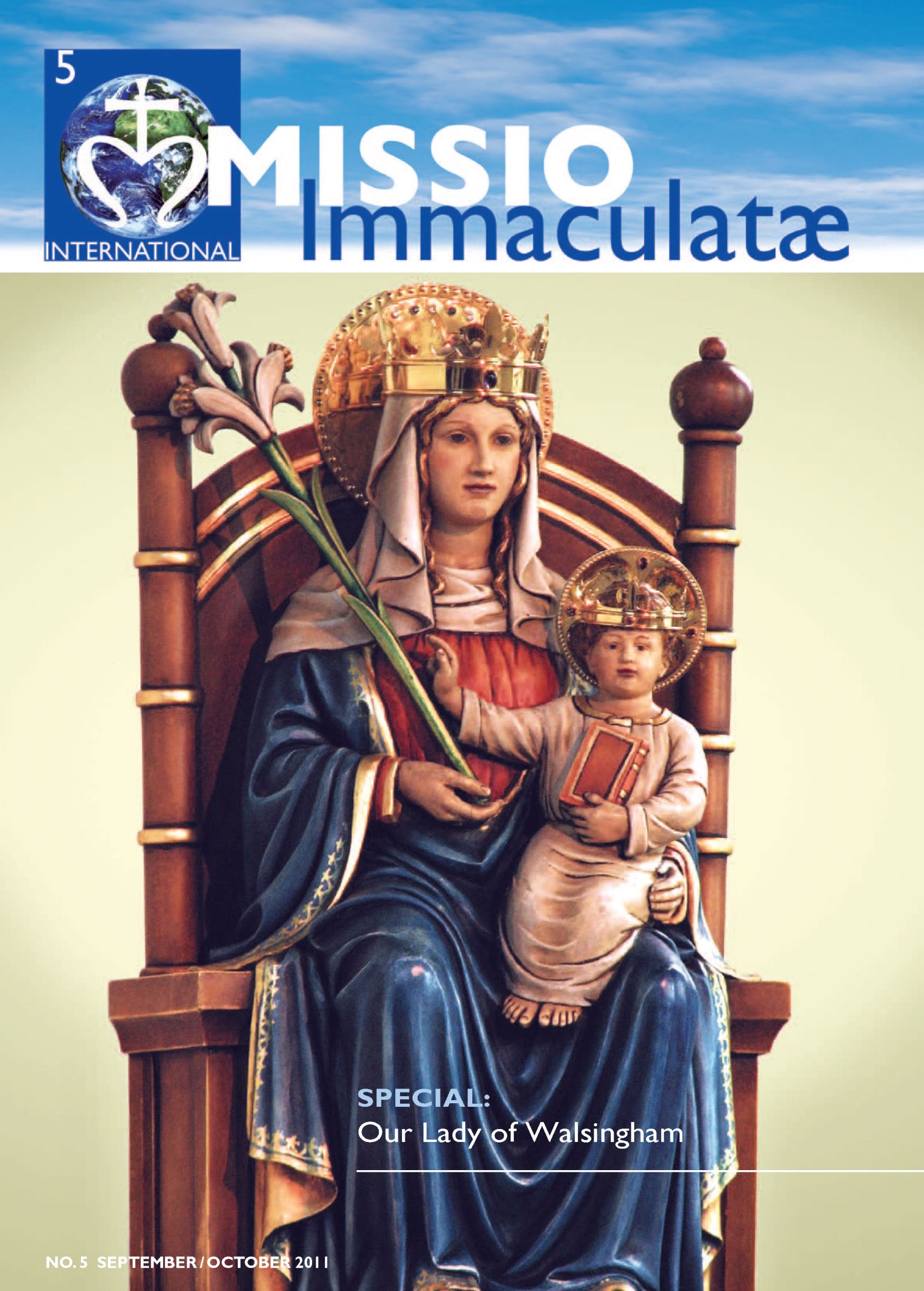