The Marian Devotion of Solanus Casey

All saints are distinguished by their profound devotion to the Mother of God, and the newly-beatified Solanus Casey, a Capuchin Franciscan friar who passed from this life only sixty years ago, is no exception. This humble soul was drawn to the Blessed Mother in his youth via the Rosary and the brown scapular. During the sixty years he spent in the religious life, he never tired of exhorting others to approach God’s Mother and ours with the heart of a child, after his own luminous example.

Only a few people have been elevated to the ranks of sainthood in the United States. Some of the feasts specific to the USA commemorate missionaries to the United States of America, like St. Frances Xavier Cabrini, St. Rose Philippine Duchesne, or St. Damien of Molokai, to name a few. A handful had direct connections to the United States, like St. Katharine Drexel and St. Elizabeth Ann Seton. And there are many more Americans whose causes for sainthood are underway, awaiting the faithful to invoke their intercession for a miracle to be granted by our Triune God. On November 18, 2017, another saintly figure, Solanus Casey (1870-1957), took the next step towards canonization, when he was declared Blessed at Ford Field in Detroit.

Solanus was born in Oak Grove, Wisconsin, in 1870 to immigrant parents, and given the name Bernard Francis. Born into a large family, Solanus had two other brothers who pursued vocations in the church. Some Americans know the story of the porter (doorkeeper) of St. Bonaventure’s Friary (in Detroit), who would give counsel and pray with those who visited the monastery and was known for his spirituality of “thanking God ahead of time.” Yet, for many, the person of Solanus Casey might be an unknown figure of American Catholicism. As Catholic Americans become introduced to the life of Solanus Casey, I wish to introduce you to the Marian devotion which comprised his life and spirituality.

One of the earliest expressions of Marian devotion, especially in the Pre-Conciliar Church, and now seeing a resurgence in the life of the faithful, was investiture in the brown scapular. Solanus’ mother gave him a scapular early in his childhood. Reflecting on an episode from his early life, Solanus believed that the scapular saved his life. After work one day, a man fell into a pit of water and was drowning. Solanus jumped in, attempting to save the man’s life. Being pulled down under the water, he clung to his scapular and was somehow pulled up. Solanus survived this near-drowning, but the other man was not as fortunate.

It is interesting that Solanus says he was somehow pulled up, even though he was being plunged under. Was it the hand of Mary, in whose garment he was clothed, that resisted the force of being plunged under? Such a conclusion might not be far-fetched, as there are many stories available to us pertaining to the scapular’s power. Homes have been saved from fire. A scapular dropped in a body of water calmed the waters which seemed to be bring about almost certain death. A bullet became lodged in the scapular, thus preventing death. Given the presence of miraculous phenomena in the life of believers, it is quite plausible that Solanus is right, that the scapular did indeed save his life. So often we are unaware of the supernatural going on around us.

Novena for His Vocation

Solanus felt a call to the priesthood stirring within his soul. After consulting his parish priest, he set out for St. Francis De Sales Seminary in Milwaukee, Wisconsin, to begin his studies. During his time there, his grades began to decline. The seminary administrators needed to make a decision: should Solanus continue on towards priesthood? They recommended that Solanus should enter a religious order. This brought his priestly discernment to a new level. Two possibilities emerged: join the Capuchins, or join a different branch of the Franciscans.

To find clarity, Solanus prayed a novena in anticipation of the December 8th Immaculate Conception feast day. As he prayed each day, he discerned that he felt called to live a life singularly consecrated to God, and at the very least, he would make a private vow of chastity. Solanus reached a conclusion by the end of the novena, as he felt the maternal presence of Mary and the words, “Go to Detroit.” The Immaculata interceded for him, and he set off for Detroit to join the Capuchins. Overcome with emotion and questioning why he went to Detroit, the novena reassured him he was where he was meant to be. At another time in ministry, when he was in need, he prayed another novena to the Immaculate Conception and received the grace for which he prayed.

In his youth, Solanus resolved to pray the Rosary privately every day, following the family prayer time. One night, when he thought about foregoing the Rosary altogether, as he knelt to pray one decade, he discovered he was alert enough to pray the entire Rosary. That same night, as he drifted off to sleep, Solanus had a startling dream in which he was suspended over fire but was saved by clinging to a rosary that was hanging over his head. This dream had a significant impact on Solanus in relating the importance of the Rosary to his devotional life, and it became the foundation on which his love for Mary grew.

Throughout his life, Fr. Solanus prayed the Rosary often and for special intentions, offering it for those he knew needed his prayers. He would often pray multiple rosaries a day. In the book, Thank God Ahead of Time: The Life and Spirituality of Solanus Casey, by Michael Crosby, O.F.M. Cap., Art Lohrman shared an anecdote about wanting to spend extra time with Solanus while out for a walk. Art pretended that he could not find the bridge to get back home. Solanus recommended praying a Rosary that he might find it, and once they found the bridge, Solanus insisted on praying a Rosary in thanksgiving. Whether by foot or car, Solanus always wanted to pray the Rosary. When he needed to go somewhere, someone would always drive him. He preferred for his driver to be a Catholic; that way, he could say his prayers, including the Rosary. The Rosary held a prominent place in the devotional life of Solanus. Not only did he pray the Rosary, he encouraged others to do so and often joined them in its recitation.

The Mystical City of God

The Sacred Scriptures provide the most significant events of Mary’s life that pertain to salvation history. We meet Mary as the virgin of Nazareth who receives a visit from the angel Gabriel, who conceives by the power of the Holy Spirit, and goes in haste to visit her cousin Elizabeth. Upon returning home, Joseph, her betrothed, must go to Bethlehem for the census. Mary accompanies him, giving birth to Jesus in the City of David. From there, following the Presentation in the temple on the fortieth day, the Holy Family flees to Egypt, and then returns home years later after the angel announces that it is safe. Then we learn of the losing and subsequent finding of Jesus in the temple, and you can probably complete the story.

We know from our liturgical celebrations that there are other events of Mary’s life which we celebrate, such as her Immaculate Conception, her Nativity, and her Presentation in the Temple. Our liturgy and Scriptures do not provide a complete portrait or biography of Mary’s life, leaving out other events. In the history of Catholicism, some individuals claim to have received mystical revelations pertaining to the life of Jesus and Mary. One such example from the 1600’s is Venerable Mary of Agreda (1602-1665), a Spanish Conceptionist Poor Clare nun, who was commanded by God to write the life of the Blessed Virgin Mary. Her mystical revelations are contained in the four-volume set of The Mystical City of God.

Initially a skeptic, not knowing if a person could capture the life of Mary, Solanus later became a devoted follower and proponent of Agreda’s work, reading it over the span of forty years, on his knees, three times through. When death neared, he requested the help of visitors and nurses to read the text to him. At a given moment, if a word or phrase was misread, he knew it and corrected them.

Solanus recommended to those who sought his counsel at St. Bonaventure’s to acquire and read the first book of The Mystical City of God. He believed if they read the first volume, they would want to read the rest of Mary’s life. The reason underlining this recommendation stemmed from Solanus’ belief that a person needed to demonstrate to God their sincerity in making their petition and foster a desire to unravel the mysteries of Jesus and Mary. The Mystical City of God became Solanus’ go-to recommendation. In one case, a person neglected reading Agreda’s biography of Mary, and the person for whom they prayed did not get any better. Seeking the advice of Fr. Solanus, he reminded the individual of the need to read The Mystical City of God, and several months later Solanus received word of a favorable outcome for the individual.

To this day, some people approach The Mystical City of God with the same skepticism as Solanus Casey initially did. The book has seen its fair share of controversy over the centuries. At one time the book was condemned, but that was due to a faulty translation, similar to the case with St. Faustina’s Divine Mercy in my Soul. Also, Venerable Mary of Agreda addressed the Immaculate Conception, believed by many at the time, but not elevated to a dogma until 1854. There were two factions in the debate over the Immaculate Conception: the Scotists and the Thomists. Being a Poor Clare, Agreda’s work reflected the Scotistic position, which caused controversy in the eyes of some. Solanus was criticized at times for his unrelenting support of The Mystical City of God. But when he encountered criticism, he always had a response. While we should not treat Agreda’s biography as the Gospel, the text can aid us in prayer and meditation, fostering a deeper devotion to the Blessed Mother. Those who read the text need not fear being misled. In 1999, the Vatican declared that there were no errors pertaining to faith or morals within The Mystical City of God.

Why We Should Love Mary

The survey here presented is an overview, and much more could have been said. As the hour of death drew near, Solanus sang out a hymn to the Blessed Virgin, having maintained his love for her from his youth and throughout his ministry. His admiration for the Mother of God should inspire us. And in fact, Solanus felt strongly about our need for a Marian devotion. He believed that devotion to Mary could help curb the growing atheism and communism of his time. He also encouraged people to “learn to know Mary that you may love Heaven and heavenly things.” This knowledge of Mary, he maintained, would help a person grow closer to Jesus. Solanus Casey was a friar who loved God, the Church, and his Blessed Mother. As he is beatified, we look to his example to help us love Mary, so that after this, our exile, she might show unto us the blessed fruit of her womb—Jesus.

Fr. Edward Looney is a priest of the Diocese of Green Bay, Wisconsin, and a member of the Mariological Society of America. He has published extensively on the 1859 Wisconsin apparition in Champion, Wisconsin and is the author of A Heart Like Mary’s: 31 Daily Meditations, available from Ave Maria Press. 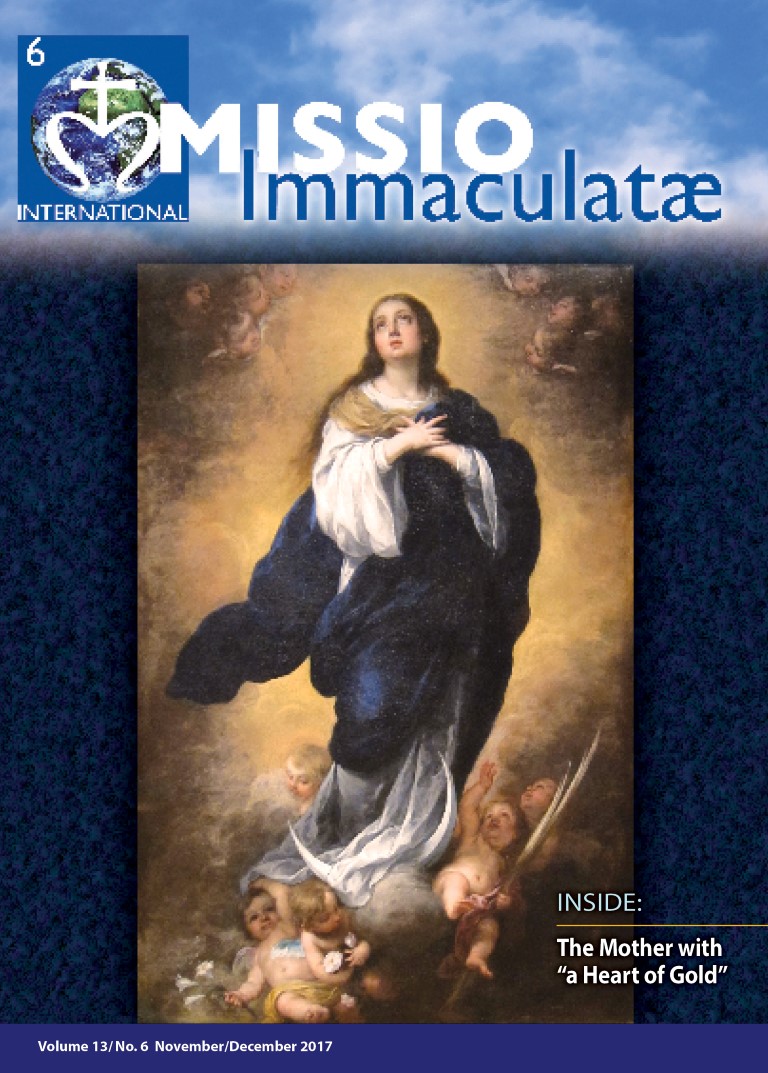