“Marian Slavery” in the Early Centuries

Marian consecration, when referred to as “slavery,” is one of desire to please, one of the will—not imposed under duress to be shackled in chains for a master’s ruthless intentions. On the contrary, it is a patronage of ardent love, binding heart to Heart. This “belonging” to the Theotokos is ancient in Christianity and models itself after Mary herself, acquiescing as “servant” (or slave) of the Lord. It is the perfect guide to freedom and an attitude of humble surrender and undying devotion, directed to Christ as ultimate goal who “emptied himself, taking on the form of a ‘slave.’”

If the beautiful prayer Sub tuum praesidium (“We fly to thy patronage”), which we considered in the last article of this series, testifies to the Christian’s child-like tendency to take refuge under the protection of the Mother of God, history will illustrate the truth of this many times over in the course of the centuries. The first such recourse involving an explicit entrustment to the Mother of God about which we have any evidence was made by the Byzantine Emperor Heraclius in 626. According to a tenth century manuscript, when Constantinople, the city on the Bosphorus, was in imminent danger, the Emperor confided it to God and the Virgin Mother, and it was spared.1

Saint Germanus of Constantinople (c. 635-733), who styled himself the “servant” or “slave” of Mary, certainly attributes the deliverance of the city on that occasion to the Mother of God. This is one of several incidents that would lead to the establishment of the Feast of the Protection of the Holy Mother of God (Pokrov) in the Byzantine Rites of the Church on the first of October. The icon of the feast portrays Mary as stretching out her mantle over the people of the city of Constantinople. The late Father Joseph de Sainte-Marie, O.C.D., did not hesitate to see in this the first known collective Marian consecration in history.2

There is also evidence for the use of the title and concept of servus Mariae (servant or slave of Mary) in African sermons and official seals from the fifth and sixth centuries. Pope John VII, who died in 707, left four different inscriptions in Roman churches describing himself in both Greek and Latin as “slave of the Mother of God.” All of this data indicates that the concept of “belonging to Mary” has been a part of the Christian mentality from very early times.

Perhaps in the earliest days, the implications of this sense of belonging to Mary were not always drawn out and developed at great length, because all the members of the household of the Faith understood their relationship to Mary instinctively, and they gratefully accepted it as an important element of their patrimony—part of the heritage bequeathed by the dying Savior to His followers. We have previously pointed out the precious testimony of Origen and the ancient prayer Sub Tuum Praesidium in this regard.

It could well be argued, in terms of the instances which we have just cited, that this impetus of declaring that a person or a place belongs to Mary reaches a certain peak in the writings of Saint Ildephonsus of Toledo (c. 610-667), the Spanish Bishop who is usually considered the first major proponent of Marian consecration as such.

In his homily in Saragossa, Spain, on November 6, 1982, Pope John Paul II, immediately prior to his act of Entrustment of Spain to Our Lady, reviewed what is for us the most relevant information about this Benedictine Abbot who became the Archbishop of Toledo:

Saint Ildephonsus of Toledo, the most ancient witness of that form of devotion, which we call slavery to Mary, justifies our approach of being slaves of Mary because of the singular relation she has with respect to Christ. “I am your servant [or slave] because your Son is my Lord. You are therefore my Lady because you are the handmaid of my Lord. I am, therefore, the servant of the handmaid of my Lord, because you, my Lady, have become the Mother of my Lord. Therefore, I have become a slave because you have become the Mother of my Maker” (De virginitate perpetua Sanctæ Mariæ, 12: PL 96, 108).

As is obvious, because of this real and existing relationship between Christ and Mary, Marian devotion has Christ as its ultimate object. The same Saint Ildephonsus saw it with full clarity: “So in this way one refers to the Lord that which serves his slave. So, what is delivered up to the Mother redounds to the Son; thus passes to the King the honor that is rendered in the service of the Queen” (c. 12: PL 96, 108). Then one understands the double employment of the desire expressed in the same blessed formula, speaking with the most Holy Virgin: “Grant that I may surrender myself to God and to you, to be the slave of your Son and of you, to serve your Lord and you” (c. 12: PL 96, 105).3

The attentive reader may by now be somewhat shocked at this terminology. How can one legitimately speak of being a “slave” of Mary? First, it should be pointed out that Saint Paul, in fact, didn’t hesitate to refer to himself as a slave (the Greek word doulos, which he used, can be rendered as either servant or slave) of Jesus Christ (cf. Rom 1:1; Col 1:7; 4:7). Secondly, the Gospel paradox is precisely that being a slave of Jesus Christ makes one truly free (cf. Jn 8:32, 33, 36). In fact, Paul was simply taking as his model Jesus himself “who, though He was in the form of God … emptied Himself, taking on the form of a slave [doulos]” (Phil 2:6-7).

What Saint Ildephonsus and many others after him did—including Saint Louis-Marie Grignion de Montfort—was to link Mary with this Gospel concept, based on the recognition that being a slave of Jesus Christ puts us in a similar relationship with Mary. On his first trip to Poland after his election, Pope John Paul II commented on Poland’s millennial consecration to Mary (made on May 3, 1966) in this way:

The act speaks of “servitude.” It contains a paradox similar to the words of the Gospel according to which one must lose one’s life to find it (cf. Mt 10:39). For love constitutes the fulfillment of freedom, yet at the same time “belonging,” and so not being free is part of its essence. However, this “not being free” in love is not felt as slavery but rather as an affirmation and fulfillment of freedom. The act of consecration in slavery indicates therefore a unique dependence and a limitless trust. In this sense slavery (non-freedom) expresses the fullness of freedom, in the same way as the Gospel speaks of the need to lose one’s life in order to find it in its fullness.4

Surely, Mary, who identified herself as the servant or slave [doule] of the Lord in her response to the Archangel and in the Magnificat (Lk 1:38, 48; the traditional translation “handmaid” seems somewhat weak by comparison),5 can teach those who lovingly submit themselves to her that service of the Lord which is true freedom. She understood this even better than St. Paul. The more we put ourselves at her disposal, the more she will lead us to the true freedom of being slaves of Christ her Son. This is an insight that was readily grasped by Pope John VII, Saints Germanus of Constantinople and Ildephonsus of Toledo and legions of other holy people who have preceded us. May we have the grace to follow in their footsteps! 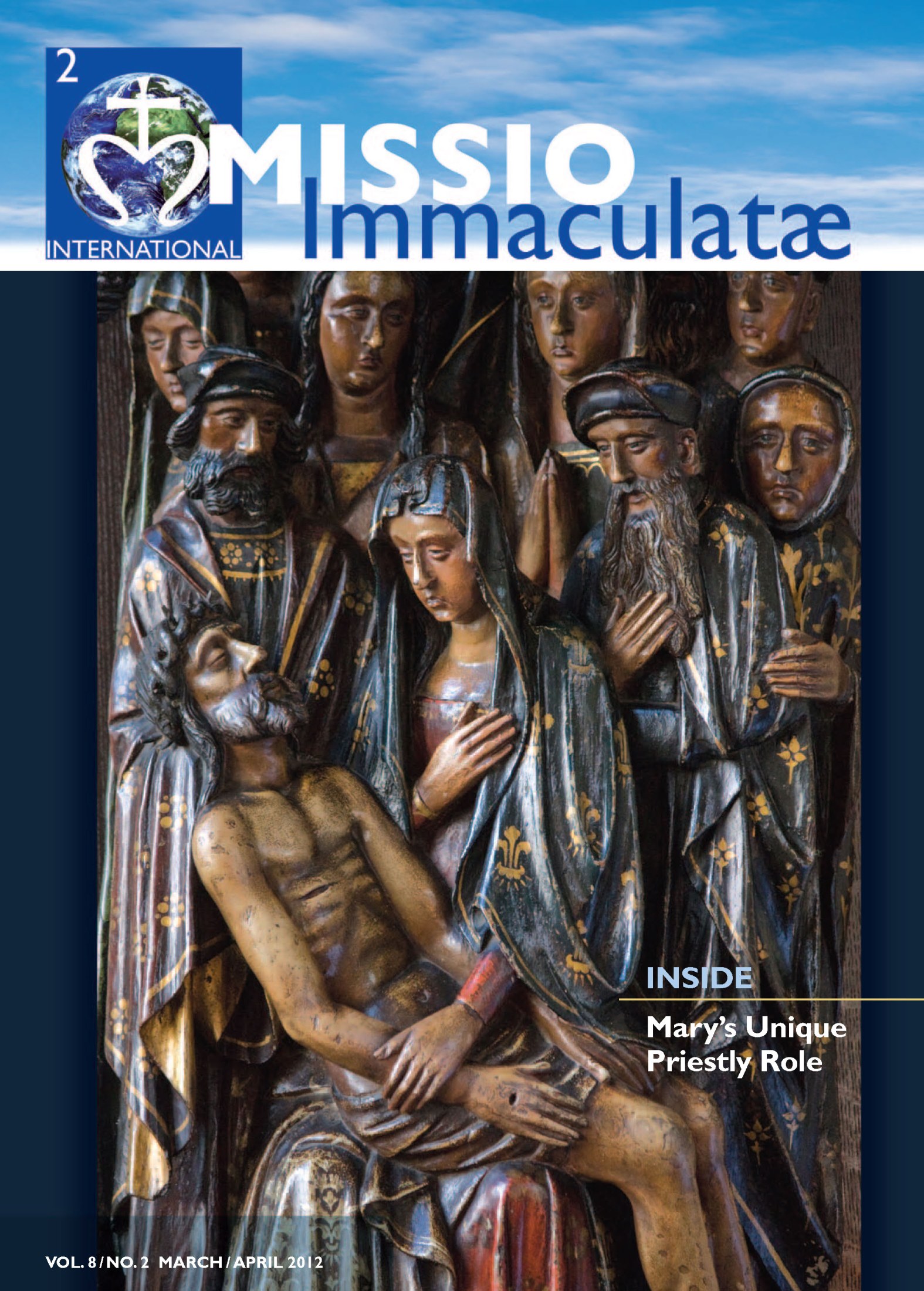