Were the Blessed Virgin Mary and Saint Joseph Truly Married?

Bl. John Paul II once taught that “Joseph and Mary are the summit from which holiness spreads over all the earth.” They were set apart by God for one another, in anticipation of the coming of the Author of Life. That there existed a true marriage bond between these two vowed to virginity cannot be doubted, according to the words of St. Augustine: “In Christ’s parents all the goods of marriage were realized—offspring, fidelity, the sacrament.” From the most perfect marriage came forth the most perfect Offspring, miraculously conceived! Therefore, we need only look to these two holy spouses to rediscover the secret for rejuvenating the Christian family.

Saint Matthew removes all doubt regarding the matter. The Virgin Mother of God was indeed the wife of Saint Joseph. In Greek, Saint Luke calls Mary the γυναίκα of Saint Joseph—the normal term for wife.

But while he thought on these things, behold the Angel of the Lord appeared to him in his sleep, saying: Joseph, son of David, fear not to take unto thee Mary thy wife (γυναίκα), for that which is conceived in her, is of the Holy Ghost (Mt 1:20, Douay-Rheims).

Saint Luke confirms the same. The Blessed Virgin Mary is the espoused wife of Saint Joseph:

…to be enrolled with Mary his espoused wife, who was with child (Lk 2:5).

In the Greek, Saint Luke employs ἐμνηστευμένῃ (emnesteumene) to denote Mary’s relation to Saint Joseph. The term denotes Jewish betrothal, which included all the legal rights of marriage but did not entail the consummation of the contract.

The common misunderstanding about the marriage of Joseph and Mary derives from the ancient and orthodox doctrine that the Mother of God and Joseph remained perpetual virgins. The reason for their virginal marriage has been apparent to Catholics for 2,000 years. The immaculate womb of Mary is the Ark of the New Covenant and the Gate of Heaven. Her soul and body were united to God in an intimate way. Remember that in the Old Testament, men were killed for simply touching the Ark of the Covenant on account of its holiness:

Oza put forth his hand to the ark of God, and took hold of it: because the oxen kicked and made it lean aside. And the indignation of the Lord was enkindled against Oza, and he struck him for his rashness: and he died there before the ark of God. And David was grieved because the Lord had struck Oza, and the name of that place was called: The striking of Oza, to this day (2 Sam 6:6–8).

The Ark of the Covenant of the Old Law was merely a sacred box containing the two tables of the Ten Commandments. How much more holy is the Mother of God who contained not the Word of God in stone but the Word made flesh. People and things used for holy purposes are not suitable for common purposes.

For example, restaurants are good things. Yet it would be sacrilegious to employ a cathedral as a restaurant and use the altar as a serving table. Similarly, the holy sacrament of marriage is good and so is the procreation of children. Yet Mary’s condition and office as the Mother of the Son of God sets her apart for sacred use, so that she and Joseph would not and did not enjoy the natural good of conjugal relations.

Some well-meaning Catholics are confused as to whether Joseph and Mary were truly and really married (as opposed to being only “betrothed”). It would seem that consummation is an essential element of holy matrimony. If consummation were essential, then Mary and Joseph were not married. Considering marriage in this way, Saint Jerome once wrote: “Joseph was more her guardian than her husband.” (Saint Jerome, Contra Helvidum, 4). This is true, of course, but it does not negate the fact that Joseph was still her true husband. Saint Jerome is attempting to defend the perpetual virginity of the Mother of God. Here, Jerome says more guardian than husband. Saint Thomas Aquinas, commenting on this passage from Saint Jerome, remarks: “Jerome uses the term husband in reference to marriage consummated” (Summa theologiae III, q. 29, a. 2, ad 1).

Regarding marriage and consummation, Saint Augustine once wrote:

It cannot be allowed that the Evangelist thought that Joseph ought to sever his union with Mary on the ground that in giving birth to Christ, she had not conceived of him, but remained a virgin. For by this example the faithful are taught that if after marriage they remain continent by mutual consent, their union is still and is rightly called marriage, even without intercourse of the sexes (De Consensu Evang. 2).

Saint Thomas holds that Joseph and Mary fulfilled both perfections of marriage perfectly. With regard to the first perfection of marriage—the inseparable covenant until death—Joseph and Mary certainly did vow to fulfill this covenant at their espousals. With regard to the second perfection of marriage—the procreation and nurturing of children—Joseph and the Virgin Mother of God accomplished this by the miraculous and virginal conception of Christ and by raising the Son of God in their home. It is true that the conception of their Child was miraculous and virginal, but one can hardly claim that their vocation as parents was “less perfect” than that of other parents. The hypostatic economy of the Holy Family stands above the natural order of family, but it does not violate the duties of the natural family.

Regarding the way in which the Mother of God and Saint Joseph fulfilled the procreative element of marriage, Saint Thomas Aquinas wrote:

But as to the second perfection, which is attained by the marriage act, if this be referred to carnal intercourse, by which children are begotten; thus this marriage was not consummated. Wherefore Ambrose says on Luke 1:26-27: “Be not surprised that Scripture calls Mary a wife. The fact of her marriage is declared, not to insinuate the loss of virginity, but to witness to the reality of the union.” Nevertheless, this marriage had the second perfection, as to upbringing of the child. Thus Augustine says (De Nup. et Concup. 1): “All the nuptial blessings are fulfilled in the marriage of Christ’s parents, offspring, faith and sacrament. The offspring we know to have been the Lord Jesus. There was faith, for there was no adultery. There was a sacrament, since there was no divorce. Carnal intercourse alone there was none” (Summa theologiae III, q. 29, a. 2).

It is both good and meritorious for married Catholics to exchange the marital debt and procreate children to the glory and honor of God. However, when the wife happens to be Immaculate Mother of the Son of God, then the rules of propriety change. The Mother of God and Saint Joseph were not perpetual virgins solely for the sake of virginity—they were virgins for the sake of the Incarnation of the Christ and the salvation of mankind.

Joseph and Mary, then, did not consummate their marriage in the former way, but in the latter way. Their marriage was without intercourse, but it was not without childbearing. Hence, their marriage conformed to the purpose of marriage in a miraculous way—by the Incarnation of Christ in the womb of Mary. Marriage is always ordained unto the procreation of children and the propagation of the human race. Observe, then, the wisdom of God in establishing the marriage of Saint Joseph and the Immaculate Mary. Even the miracle of the Incarnation did not set aside the natural institution of matrimony. Grace does not destroy nature, but perfects it.

Holy Mary, Ark of the Covenant, pray for us.

Saint Joseph, Guardian of the Redeemer, pray for us. 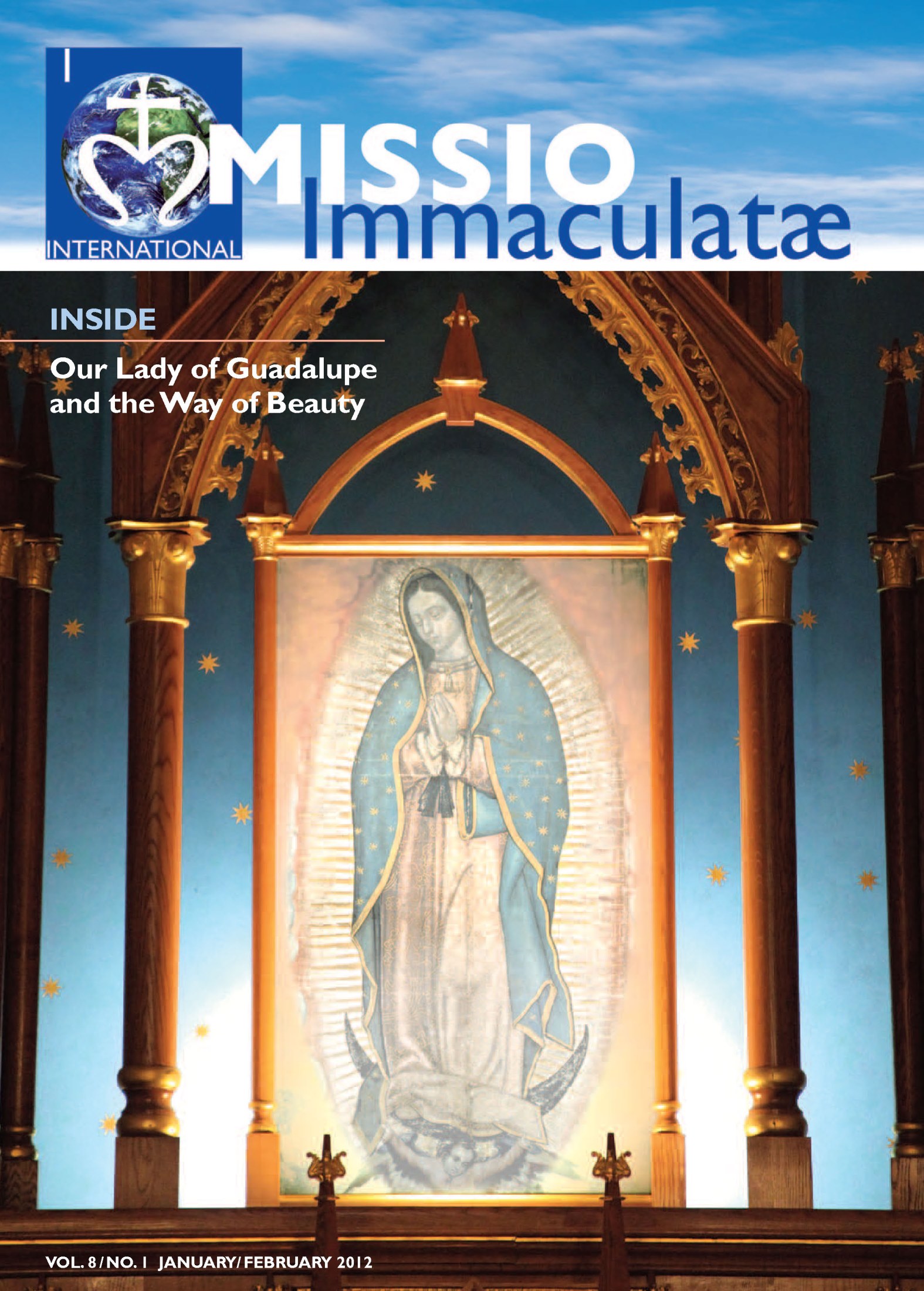