Mary as Personified Wisdom: A Commentary on Ecclesiasticus 24:6-10

The Virgin Mary, Queen of all nations, Queen of all hearts, who “held in [her] womb Him whom the heavens cannot contain” (St. Cyril of Alexandria), is wonderfully prefigured in all her splendor in the Book of Ecclesiaticus (Sirach), Chapter 24. Verses 6-10 of this classic Marian text foretell the regality of Our Blessed Lady and the universality of her reign, which extends to all places and peoples.

The following is a continuation of a commentary by Dr. Taylor Marshall on the twenty-fourth chapter of Ecclesiasticus. This chapter is the greatest prophecy of our Immaculate Lady and foretells all her titles and offices as the Mother of God, Queen of Heaven, and Mediatrix of all graces. This article picks up where the last article left off.

6 I made that in the heavens there should rise light that never faileth, and as a cloud I covered all the earth:

Next, the Holy Spirit writes that Lady Wisdom will be a cloud that covered all the earth. How did Mary cover the earth? Mary covered the earth in two ways. Mystically, Mary is that miraculous cloud foreseen by the Prophet Elias. In those days, the earth was dry and without water. From Mount Carmel, Elias saw a cloud bringing forth water for the life of the land of Israel. By this cloud, Elias saw the coming of the Immaculate Conception, the cloud bringing forth the waters of life.

Secondly, Mary is the cloud that covers the whole earth, because since the time of Christ her soothing shade has spread to all nations. The blue mantle of Mary is the cool shade of divine mercy. Those redeemed by Christ recognize that Mary is the cooling cloud that hides them from the scorching heat of God’s wrath against sin. Mary is not opposed to God’s wrath, but as the tender Mother of the Son, she signifies the merciful plan of God toward repentant sinners. When a sinner finds shade under the blue cloud of her mantle, he does not thwart the justice of God. Instead, the mercy of Mary’s mantle draws them closer to her womb where Incarnate Justice once resided. Their new penitence and faith lead them to be justified through Christ’s merits.

7 I dwelt in the highest places, and my throne is in a pillar of a cloud.

In verse seven, the Holy Spirit foretells the bodily Assumption of Mary as the Queen of Heaven enthroned at the right hand of Christ the King. It was not enough for the soul of Mary to be in Heaven. It is true that Mary’s soul was perfectly united to the divine will. Moreover, Mary’s soul was pierced and transfixed by the sword of sorrows when she saw the pierced Heart of Christ on the Cross. He was Incarnate Justice slain by the sword of injustice. Yet, Mary’s body also carried the Body of Christ for nine months. In the darkness of her womb, God lived. In her body did the Sacred Heart experience its first heartbeat. Mary’s body was a holy tabernacle of God’s real presence.

Mary’s physical body was the home of the infant God-man. God desired to have her body with Him always. As God the Father said to God the Son: Arise, O Lord, into thy resting place: thou and the ark, which thou hast sanctified. Let thy priests be clothed with justice: and let thy saints rejoice (Psalm 131:8-9). Mary is the ark that Christ sanctified. Thus, when God says “Arise, thou and the ark,” He means, “Come to Heaven, Christ and Thy Mother.”

8 I alone have compassed the circuit of heaven, and have penetrated into the bottom of the deep, and have walked in the waves of the sea

The Holy Spirit writes that Mary has “compassed the circuit of heaven,” but how is this possible? The prophet Jeremiah makes it clear when he prophesied by the same Spirit: “For the Lord hath created a new thing upon the earth: a woman shall compass a man” (Jer 31:22). Who is this man if not Jesus, the Son of God? This conforms to what we pray in Matins concerning the expanse of the Virgin’s womb:

O holy and immaculate virginity, I know not by what praises I may extol thee: for thou hast borne in thy womb, whom the heavens could not contain.1

If Christ is the God of Heaven and Earth, then Mary’s womb is the most expansive chamber within the entire created universe. When King Solomon built the great Temple of God in Jerusalem, he admitted that his glorious temple could not contain God, since not even heaven could contain God:

Is it then to be thought that God should indeed dwell upon earth? For if heaven, and the heavens of heavens cannot contain thee, how much less this house which I have built? (3 Kings 8:27).

So then, the stainless womb of Mary was the only chamber that truly and properly contained God. Her womb encompassed the Body, Blood, Soul, and Divinity of Jesus Christ. This is her greatest privilege, to be the Mother of God.

9And have stood in all the earth and in every people

In the ninth verse, the Holy Spirit teaches us that Mary shall stand in all the earth and in every people. How does the Spirit enable his created and immaculate Spouse to accomplish this? The Holy Spirit does this in two ways.

First, the Holy Spirit spreads devotion to the Blessed Virgin Mary in every nation of the earth. Are there not shrines to Mary in the Holy Land? In Egypt? In Syria? In every nation of Europe? In Africa? What of North America? South America? Australia? Russia and China? Yes, in every nation on earth there are churches erected to the honor of All Holy Mother of God. In “all the earth” we find shrines, images, and altars dedicated to the praise and glory of Mary, the Mother of Our Lord Jesus Christ. If Mary is “blessed among women,” then surely wherever there are Christian women, there is praise for Mary.

Did not France experience her continual presence in the nineteenth century? In 1830 she appeared as Our Lady of the Miraculous Medal to Saint Catherine Labouré in Paris. She appeared in La Salette, France in 1846 to two shepherd children. In 1858 she appeared in Lourdes, France, to Saint Bernadette Soubirous and revealed her identity as the Immaculate Conception.

10And in every nation I have had the chief rule

The Holy Spirit indicates that his created Bride, Mary Most Holy, shall hold the chief rule. Yet there are few nations that officially recognize Mary as reigning over their nation. Poland, it is true, publicly recognizes Mary as the Queen of Poland. Prior to the death of Blessed Charles of Austria, the physical crown of the Kingdom of Hungary belonged by right to the Mother of God and was worn by the king who acted as her vicegerent. However, most nations do not externally recognize Mary as their Queen. How can she be said to reign over every nation?

The Catholic Church teaches that the New Law of Jesus Christ is not an outward law written on tablets of stone, but that it is the inward presence of the Holy Spirit. The Holy Spirit in our hearts is the New Law of God. Saint Augustine affirmed this truth in these words: “What else are the divine laws written by God himself on our hearts, but the very presence of His Holy Spirit?”3Saint Thomas Aquinas affirms the same: The New Law is chiefly the grace itself of the Holy Ghost, which is given to those who believe in Christ.4

So then, the New Law of the New Covenant is an inward law confirmed by the presence of the Holy Spirit in the heart of the believer. Consequently, Christ rules in the heart of man. This is why Christ says the kingdom of God is within you (Lk 17:21).

Now, the reign of Christ is accomplished by the grace of the Holy Spirit. The kingdom of God is ruled by grace. So Mary as the Spouse of the Holy Spirit participates in this rule through grace. She is not a passive Queen. She actively participates in the rule of grace by being perfectly united to the divine will. Sweet Mary is both the Mediatrix of grace and the Dispensatrix of grace. 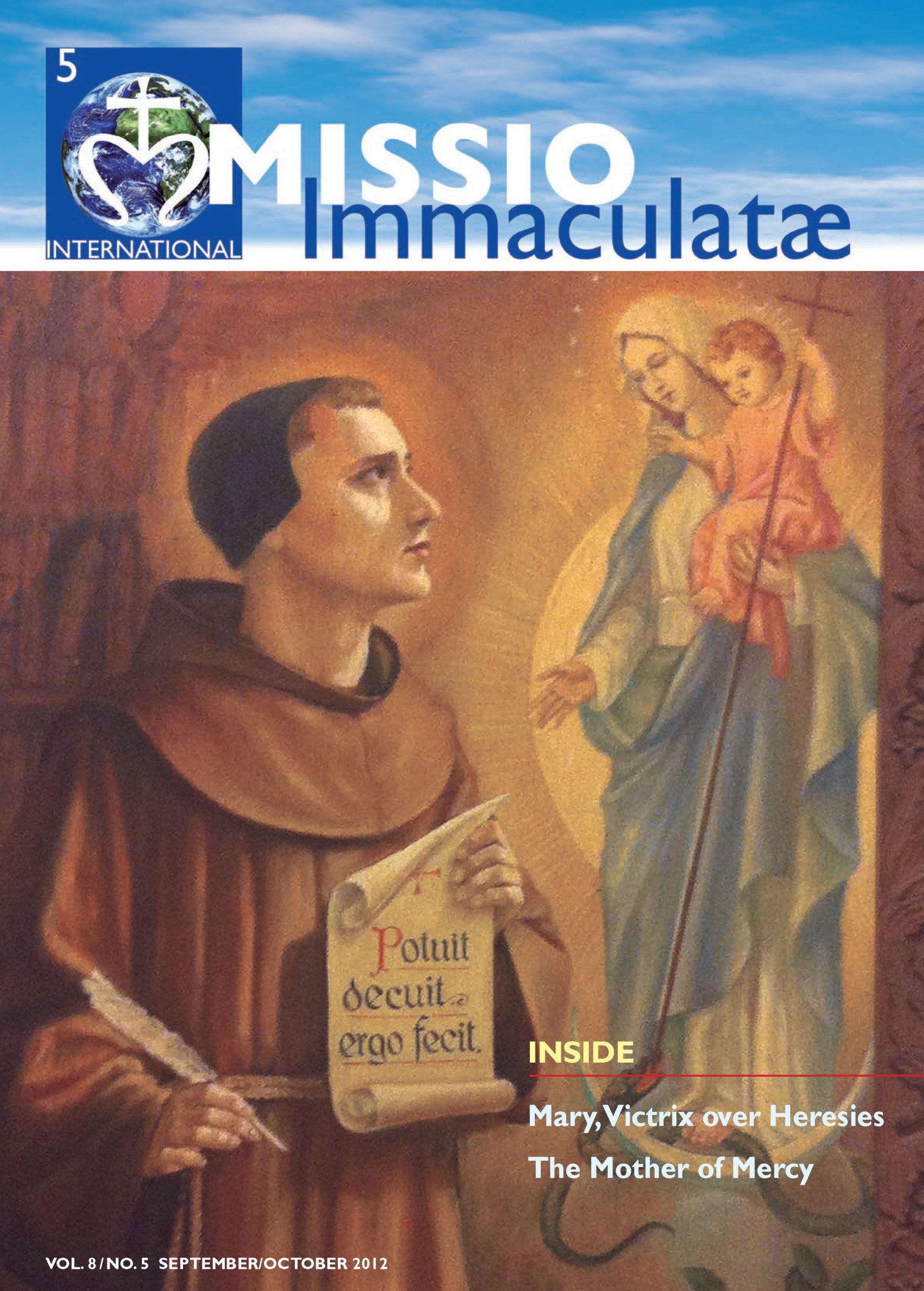