Among the ranks of little-known but gigantic saintly figures is Conchita, a laywoman and mystic who lived during the troubled years of the Mexican persecutions of the twentieth century. Hers was a sublime participation in Mary’s spiritual maternity, especially in regard to priests, entailing a life sealed by Our Lady’s coredemptive love—a martyrdom of charity.

It has been announced that the Venerable Conchita (María Concepción Cabrera Arias de Armida) who lived from December 8, 1862, to March 3, 1937, is to be beatified in Mexico City on May 4, 2019. By any measure, Conchita was an extraordinary woman. She was a Mexican wife, mother of nine children, widow, grandmother of sixteen, the foundress of five Works or Apostolates of the Cross (Obras de la Cruz)[1] and an awe-inspiring mystic and spiritual writer—still not well known, unfortunately, in the English-speaking world. My hope is that this article may help to introduce her to a larger English-speaking public, at least in some small way.

I first made her acquaintance, so to speak, in 1978, when I came across a book written about her[2] by a spiritual author whom I respected, Père Marie-Michel Philipon, O.P. (1898-1972). He had written an impressive work on Saint Elizabeth of the Trinity (1880-1906), and so I reasoned that this book, too, should be a good spiritual resource. I was not disappointed. In that book he recounted the story of an extraordinary soul who, nonetheless, wrote about profound spiritual realities in language that could be understood by ordinary people. He went so far as to compare her to the first two great women to be recognized as doctors of the Church: Saint Catherine of Siena and Saint Teresa of Avila.

It has been remarked that Conchita wrote practically as much as Saint Thomas Aquinas, although they obviously represent different but, nonetheless, complementary approaches to theology. Hers was not the highly structured speculative theology of the academy, which justly proceeds from Scripture and Tradition (although she would receive a great deal of input from her spiritual directors formed in this Tradition), but rather the symbolic theology that springs from listening to the voice of the Lord in her inmost being. A huge part of Conchita’s writing, in fact, is made up of the sixty-six volumes of her spiritual diary (in Spanish, Cuenta de Conciencia, or Account of Conscience), which she wrote in obedience to her spiritual directors, most of them bishops, several of whose causes have been opened in view of their possible beatification. Saints not infrequently appear in constellations, each supporting and enriching the others.[3]

On the surface, the life of Conchita might seem to have been rather ordinary, except for the fact that she lived it during the persecution of the Catholic Church in Mexico by the Mexican government, the martyrdom of many of her fellow countrymen and the harrowing “catacomb” experience that ensued.[4] She lived through it all, and it was in these circumstances that she learned how to be not only the widowed mother of her own family, but also the spiritual mother of priests.

In this regard, she shares some similar characteristics with the Venerable Louise-Marguerite Claret de la Touche (1868-1915), about whom I wrote some time ago.[5] What has been noted by a number of observers is that, from at least about the middle of the nineteenth century, the Lord has been raising up chosen souls to speak or write about the urgency of the call for the sanctification of the clergy. Almost none of these figures, such as Conchita and Louise-Marguerite, knew each other or had any contact with one another, but each from his or her own unique perspective presented this call to those who would listen or inculcated within their own circles the imperative of praying, sacrificing themselves and even offering themselves as victims for the sanctification of priests.[6] One can hardly overemphasize this imperative today in the light of so many crises which the Church is undergoing. Many of the words which Conchita received from the Lord in this regard may be found in the anthology, Priests of Christ, excerpted from the sixty-six volumes of her Account of Conscience or Confidences.

Obviously, then, Conchita had a profound ecclesial and Marian vocation. Not only did she have an intense devotion to the Mother of God,[7] but she also lived in constant union with Mary. This became especially manifest in the great crowning grace of her life, received on March 25, 1906, and known as the “mystical incarnation.” The late Bishop Joseph J. Madera, M.Sp.S., strove to explain this extraordinary grace in this way:

The mystical incarnation may be compared to the indwelling of Jesus in Mary from the moment of His conception in her womb. The Lord had raised Mary to a level of holiness never to be equaled by any other human being. Nonetheless, the specific grace granted to Conchita on March 25, 1906, as far as we know, has been granted to only a limited number of souls. The fundamental rule is that, even though God grants extraordinary graces to chosen souls, what he confers on them is eventually intended for the up-building of the entire Body of Christ. Since the mystical incarnation which Conchita experienced is rooted in the sacrament of baptism, this grace also constitutes for all of us an invitation to live our baptismal commitment at an ever-deeper level. This is precisely what the Fathers of the Second Vatican Council wanted to emphasize in the fifth chapter of Lumen Gentium on the universal call to holiness.[8]

Although Conchita received this extraordinary grace in 1906, she would effectively spend the rest of her life trying to fathom what had been done in her and how to respond to it. The second to last retreat of her life in 1935, directed by her great spiritual father and friend, the Servant of God, Archbishop Luís María Martínez (1881-1956), Archbishop of Mexico City and Primate of Mexico, was still a matter of striving to penetrate more deeply into this singular grace, which was (1) a share in the priesthood and victimhood of Jesus, (2) Eucharistic and (3) Marian. Let us consider for a moment the Marian dimension of the “mystical incarnation”:

Through the mystical incarnation, Conchita had been associated with the redemptive power of Jesus, and she had to contemplate Mary as a model of this redeeming and universal dynamism. Mary, the Coredemptrix par excellence, would teach her how to conform her heart to the Heart of Jesus. Mary would teach her to live the priestly and Eucharistic dynamism with a truly motherly heart.

This stage, in which Mary lived her maternal priesthood on behalf of the nascent Church, was the most fruitful in her life, because she continued to offer her Son to the Father and to offer herself in union with Him in order to obtain graces for her new sons. Conchita was to reflect the life of Mary and be a faithful echo of her maternal heart with the same redeeming and glorifying end: the salvation of souls.

Conchita, like Mary, was to be not only mother of Jesus by virtue of the mystical incarnation, but also mother of His Mystical Body, the Church. The participation in the redeeming offering of Jesus would acquire the nuance of ecclesial maternity. Mary would teach her to live her priesthood in a maternal manner.

Conchita would call this stage in the life of Mary, Mother of the Church, “the stage of the solitude of Mary,” which thus expressed Our Lady’s intimate and profound sorrow at the absence of her Son.

During these years of solitude, Mary lived her maternal priesthood with perfect joy, with her gaze fixed on her absent Son. Her heart, filled with love and sorrow, longed for full union with the Trinity, while living in faith and hope.

Conchita tried to live this same experience: being the echo of the Heart of Mary, accepting maternally the martyrdom of love for others.[9]

Now, of course, we must recognize that what is spoken of here is not the ministerial priesthood, but the common priesthood of the faithful,[10] even though we may rightly argue that the priesthood exercised by the Mother of God, though not hierarchical or ministerial, is of an even higher order.[11] This also says something quite exceptional about the grace of Conchita’s “mystical incarnation.”

[1]     These “Works” are briefly described in Concepción Cabrera de Armida, Under the Gaze of the Father: Retreat Directed by Archbishop Luis M. Martínez on the Grace of the Mystical Incarnation 1935 (Staten Island, NY: Alba House, 2011) 201, endnote 6.

[6]     Cf. Eucharistic Adoration for the Sanctification of Priests and Spiritual Maternity (Vatican City State: Congregation for the Clergy, 2007; http://www.clerus.org/clerus/dati/2008-01/25-13/Adoration.pdf). This important publication lists both Louise-Marguerite and Conchita, but is by no means an exhaustive list of souls who have offered their lives for the sanctification of priests. 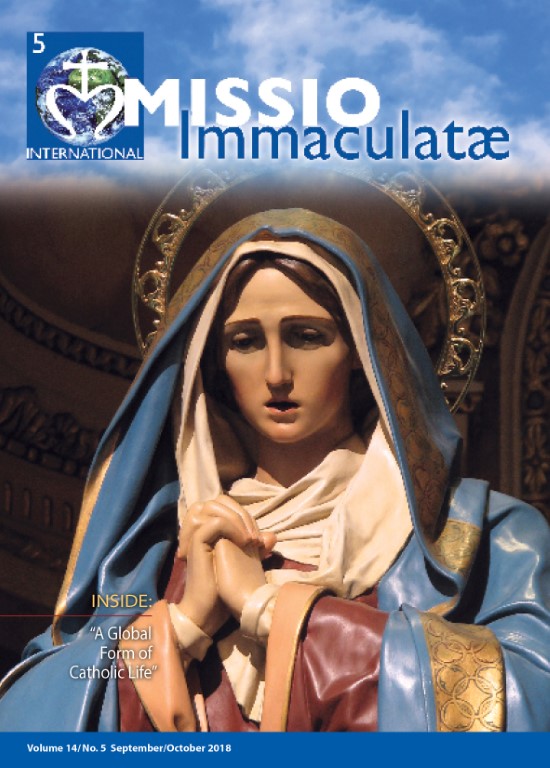