The Words of Our Lady of Fatima

When Our Lady appeared to the three shepherd children at Fatima in 1917, she delivered to the world a message as simple as it is timely. She gently but gravely reminded her wayward children to turn back to the Gospel with their whole heart by way of her Immaculate Heart. Ninety-five years later, that message has lost none of its relevance or urgency. But will mankind heed her call?

This article is the second part of a four-part series in which we will consider Our Lady of Fatima and her words to the world, with a view towards preparation for the 100th anniversary of Our Lady’s appearances at Fatima that will be commemorated throughout the world in 2017. In this second article, we give a month-by-month summary1 of Our Blessed Mother’s words to Lucia dos Santos, Francisco Marto and Jacinta Marto in Fatima during 1917, which is helpful as we seek to understand more fully her message to them and to us.

“The Lady” lovingly speaks first to inform the children that she will do them no harm. She proclaims that she is from Heaven and wants Lucia and her two cousins to return to the Cova da Iria every thirteenth of the month for the next six months at the same hour. Later, Mary will reveal her identity and what she desires. Our Lady will even “return here yet a seventh time.”2 The Mother of God assured Lucia that the three seers would go to Heaven, but that Francisco would have to recite many Rosaries. When Lucia asked whether her two deceased friends, Maria and Amelia, were in Paradise, Mary answered “yes” regarding Maria. As to Amelia, “She will be in Purgatory until the end of the world.”

The Ever-Virgin questioned the children: “Are you willing to offer yourselves to God and bear all the sufferings He wills to send you, as an act of reparation for the sins by which He is offended, and of supplication for the conversion of sinners?” The children responded, “Yes, we are willing.” “Then you are going to have much to suffer, but the grace of God will be your comfort.” Enveloped by an intense light that emanated from Mary’s open hands, the children felt compelled to kneel, and they prayed: “O Most Holy Trinity, I adore you! My God, my God, I love you in the Most Blessed Sacrament!”

After Lucia asked what “The Lady” desired, Mary responded by telling her to return with Francisco and Jacinta in July, recite the Most Holy Rosary daily, and learn to read. When Lucia sought a cure for an ill person, Our Lady replied that he would be healed within the year if he converted. To Lucia’s request that the Ever-Virgin usher her and the other two to Paradise, Mary said: “Yes, I will take Jacinta and Francisco soon. But you are to stay here some time longer. Jesus wishes to make use of you to make me known and loved. He wants to establish in the world devotion to my Immaculate Heart.” Lucia inquired whether she herself would be left alone. Our Lady promised her that her Immaculate Heart would remain her consolation.

Our Lady repeated the importance of the children returning on the thirteenth of the month and the daily recitation of the Most Holy Rosary. This time, Mary added that the Rosary should be prayed “in honor of Our Lady of the Rosary . . . because only she can help you.” Sympathetic to Lucia’s deep sorrow that some did not believe in Our Lady’s appearances, Mary stated that in October, she would reveal her identity and perform a miracle. In reply to Lucia’s plea for diverse favors on behalf of others, the Mother of God asserted that it was necessary for those persons to pray the Holy Rosary to obtain those graces.

After exhorting the children to sacrifice themselves in reparation for sins in order to communicate their love for Jesus, to convert sinners and to repair for the offenses against the Immaculate Heart of Mary, Our Lady showed the trio a horrifying vision of hell that shook them profoundly. This is the First Secret of Fatima. She gently addressed the children: “You have seen Hell where the souls of poor sinners go. To save them, God wishes to establish in the world devotion to my Immaculate Heart. If what I say to you is done, many souls will be saved and there will be peace.” Then, she taught them what is now the familiar prayer that we recite after each Mystery of the Most Holy Rosary: “O my Jesus, forgive us, save us from the fire of hell. Lead all souls to Heaven, especially those who are most in need.” Our Lady also disclosed the Second Secret of Fatima.

The war is going to end; but if people do not cease offending God, a worse one will break out during the Pontificate of Pius XI. When you see a night illumined by an unknown light, know that this is the great sign given you by God that he is about to punish the world for its crimes, by means of war, famine, and persecutions of the Church and of the Holy Father. I shall come to ask for the consecration of Russia to my Immaculate Heart and the Communion of Reparation on the First Saturdays.

If my requests are heeded, Russia will be converted, and there will be peace; if not, she will spread her errors throughout the world, causing wars and persecutions of the Church. The good will be martyred, the Holy Father will have much to suffer, various nations will be annihilated. In the end, my Immaculate Heart will triumph. The Holy Father will consecrate Russia to me, and she will be converted, and a period of peace will be granted to the world. In Portugal, the dogma of the Faith will always be preserved.

The Third Secret3 is related to the wicked persecutions against the Church and her children that have occurred during recent years. Oceans of blood would be spilled because of man’s inhumanity to man, a hatred for God and the Catholic Church, and a general spiritual malaise. Penance and conversion are paramount if such infidelity towards our Creator and assaults against human life are to be avoided in the future. Interestingly, Our Lady did not speak as the Third Secret was unfolded before the trio of seers.

Arturo de Oliveira Santos, the Administrator of the town of Vila Nova de Ourem, prevented the children from being present at the Cova for the appearance of Our Lady scheduled for August 13, imprisoning them and even threatening them with death if they would not reveal “the secret.” But such machinations did not stop Mary from making August 19 the date of her arrival. Our Blessed Mother stated again her desire that the little shepherds daily pray the Most Holy Rosary and that the miracle due in October would not be as extraordinary because of the efforts of the civil authorities to detain the children. Regarding Lucia’s question as to what should be done with the money that had been left at the Cova, the Mother of God replied:

Have two litters made. One is to be carried by you and Jacinta and two other girls dressed in white; the other one is to be carried by Francisco and three other boys. The money from the litters is for the Feast of Our Lady of the Rosary, and what is left over will help towards the construction of a chapel that is to be built here.

When Lucia requested cures for some of the sick, Our Lady said that some would be cured within the year, and then she concluded the August apparition by declaring:

Pray, pray very much and make sacrifices for sinners; for many souls go to hell, because there are none to sacrifice themselves and to pray for them.

Despite the difficulty in reaching the Cova due to the approximately thirty thousand people in attendance, the children eventually arrived at that sacred spot. After the usual exchange between Mother Mary and daughter Lucia, Our Lady said:

In October Our Lord will come, as well as Our Lady of Dolors and Our Lady of Mount Carmel. Saint Joseph will appear with the Child Jesus to bless the world.

Mary referred to the penances that the little shepherds had assumed.

God is pleased with your sacrifices. He does not want you to sleep with the rope on (tied around the waist), but only to wear it during the daytime.

The September encounter ended with Lucia offering petitions to the Ever-Virgin. Then, the girl of ten, upon the departure of the Queen of Heaven, urged the crowd, including the numerous priests present: “If you want to see Our Lady, look there!”

Both throngs of people and inclement weather persisted. Our Blessed Mother answered Lucia’s oft-repeated question, “What do you want of me?” thus:

I want to tell you that a chapel is to be built here in my honor. I am the Lady of the Rosary. Continue always to pray the Rosary every day. The war is going to end, and the soldiers will soon return to their homes.

As previously, Lucia presented petitions to Our Lady, who replied that those who request favors from God must beg forgiveness for their sins and be converted. Mary then said: “Do not offend the Lord our God anymore, because He is already so much offended.” Opening her hands, Our Lady ascended, while her image was projected onto the sun. Then, as promised, the Child Jesus, Saint Joseph and she herself appeared. The sun’s brightness increased. The sun spun, emitted vivid colors and began to drop to earth, but it halted and retook its normal position. The Miracle of the Sun had occurred, and this sixth apparition was concluded.

3 The Third Secret and the accompanying Commentary, which together are published by the Congregation for the Doctrine of the Faith under the title, The Message of Fatima of June 26, 2000, are available on the Web Site of the Holy See (http://www.vatican.va). 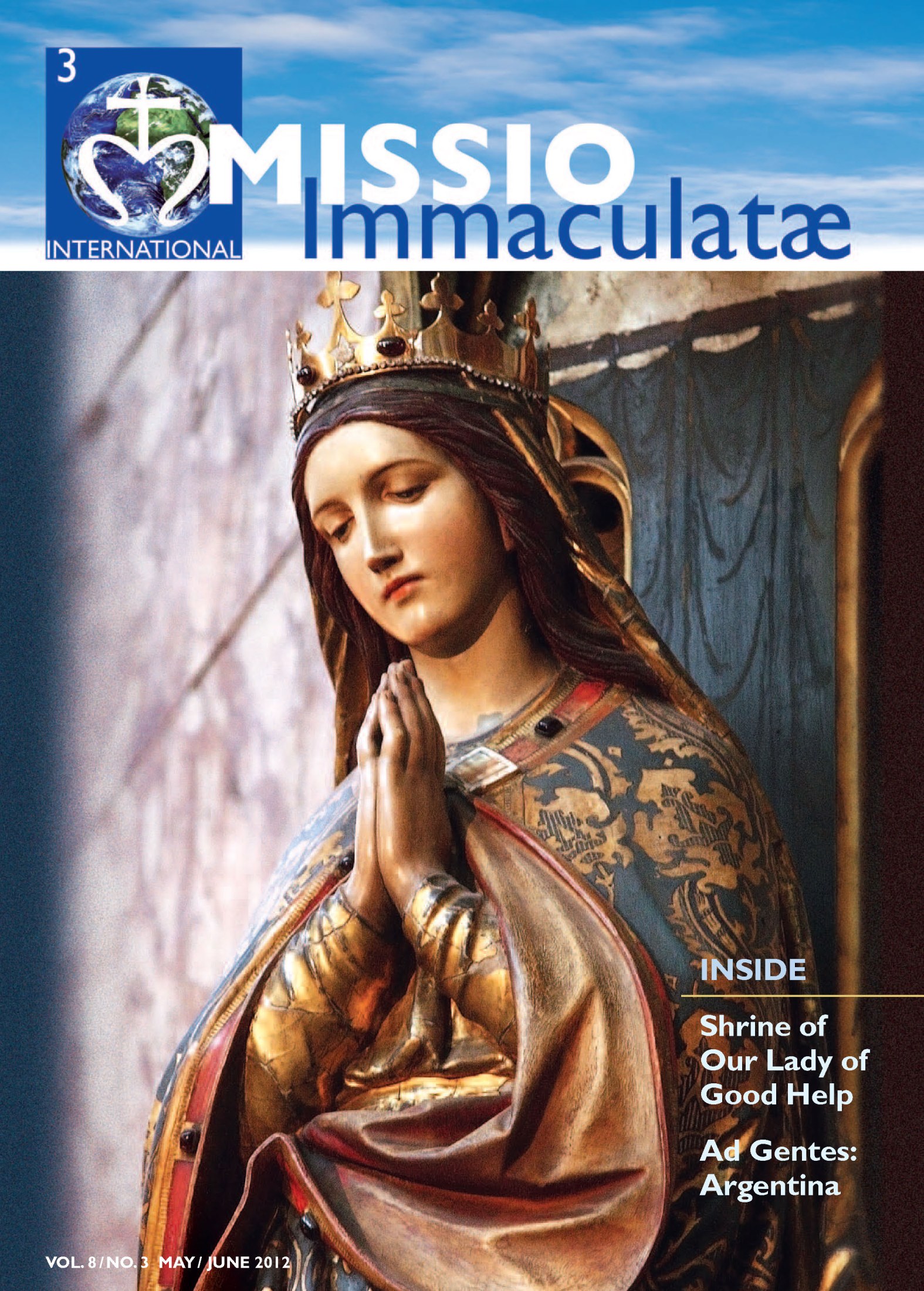